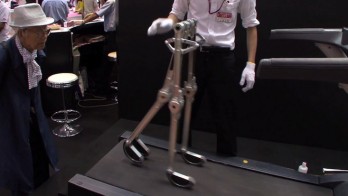 When it comes to a lot of things, simpler is usually better. Computer programming, UI design, trying to write like Ernest Hemmingway. But you might not think the same thing applies to robotics, especially when you’re trying to mimic something like complex human motion. Well, you’d be wrong.

Researchers at the Nagoya Institute of Technology in Japan have been working on a “robot” called BlueBiped that walks without needing a power source or any sort of electronics; it kind of challenges your definition of “robot.” BlueBiped functions entirely from momentum, similarly to how people walk, in part, by using momentum (except people don’t use momentum exclusively). With a small push and a slight downward slope, BlueBiped can walk until there’s no walking left to do.

Last year, BlueBiped walked for thirteen hours, all by itself. That’s 100,000 steps and 9 miles, all without any sort of human assistance, just a downhill slope. It’s all very impressive, but it’s kind of hard to think of an application off the top of your head. The main idea seems to be that it could provide walking assistance of some sort, which could work well for people who have legs that can’t quite provide support, but can still provide some locomotion. In any event, BlueBiped is an interestingly purist experiment in robotics and elegance of design. It is kind of creepy to watch the thing just trucking along like no big deal, though.

For the record, your guess as to why they’re calling a 4-footed, silver robot “BlueBiped” is as good as mine.