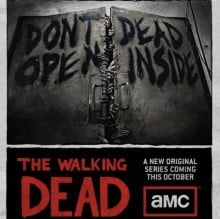 Despite strong ratings and its recent renewal by AMC, The Walking Dead is reportedly firing the entirety of its writing staff. Moreover, the zombie series could dispatch with an in-house writing staff entirely for Season Two, relying instead on freelancers assigned on a script-by-script basis. Series writer, EP, and director Frank Darabont would stay on, however, and comic creator Robert Kirkman, who wrote an episode this season, could continue on in a contributing role.

Deadline has the scoop:

I hear The Walking Dead writer/ executive producer/ director Frank Darabont has let go of the writers on the hot freshman AMC series, which has already renewed for a second season. That includes Darabont’s No. 2, writing executive producer Charles “Chic” Eglee. Writer turnover on series between seasons is commonplace but wholesale overhauls are unusual. What’s more, I hear Darabont is looking to forgo having a writing staff for the second season of Walking Dead altogether and assign scripts to freelancers.

This seems very odd. The fifth episode of this first, six-episode season had even higher ratings than the already-strong series premiere, so tanking ratings aren’t an excuse, and the show has been widely critically acclaimed even as it has daringly moved further away from the original source material. One possible explanation is that Darabont has been doing a lot of the work to begin with — he wrote episodes one and two himself and was thoroughly involved with the writing of the other four. But thirteen episodes is a lot more than six, especially if the comics become less reliable as source material to fall back on, and firing the writers seems a potentially strong jolt to the series’ momentum, to say the least.

Update: Robert Kirkman told TV Guide that the rumors are overblown, although he seemed to confirm that Darabont might ultimately fire the writers; the only confirmed departure is Charles ‘Chic’ Eglee, formerly Darabont’s #2.

It’s a little premature to be nailing down. I don’t know if it’s going to be a freelance situation or if we’re going to have writers in a writers’ room. That’s something that’s being worked on now. Everybody knows what they’re doing. AMC has done a few television shows before, and Frank Darabont is a professional. Whatever is decided, I don’t think it will affect the show one way or another.”