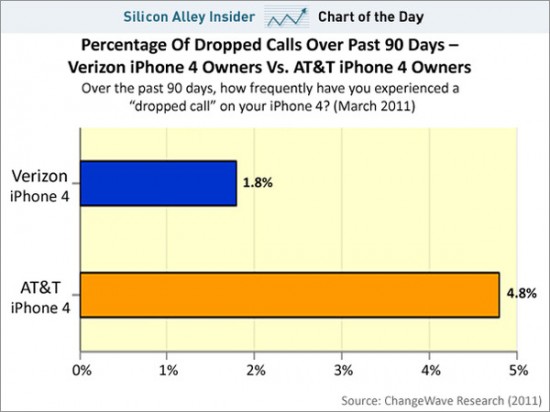 Anyone surprised? A recent Changewave Research survey of mobile owners found that the AT&T iPhone 4 drops significantly more calls than the Verizon iPhone 4: These numbers jibe roughly with networkwide dropped call rates. This actually represents an improvement for AT&T, which Consumer Reports slammed as the worst mobile carrier in America last year: In September of 2010, AT&T dropped a whopping 6% of calls, according to survey participants. But it has a lot of catch-up work to do, as Verizon’s dropped call rate represents a record low for the company.

Changewave notes that Verizon “is still in the early stages of its iPhone 4 offering to consumers,” and that it remains to be seen how it fares when more are added to the mix. (As Marco Arment argues, this is likely to be a gradual process, as there’s a sizable group of people who are currently on Verizon Wireless and want to make the switch to the iPhone, but are likely to wait for their contracts to run out to do so.) At that, Verizon’s network has been more thoroughly stress-tested than is often widely assumed in such debates as these — it may not have had the iPhone in 2010, but it did have a decent number of Android smartphones — and that’s quite a dropped call gap.