Ursula K. Le Guin: The Legacy of a Fantasy Legend 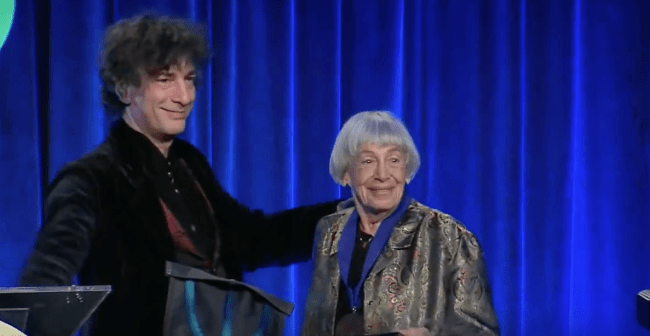 Yesterday we lost one of the most iconic and prolific fantasy authors of the era in Ursula K. Le Guin. I was first exposed to her literary work in college through her collection of short stories Changing Planes. I was always impressed and moved by Le Guin’s ability to see beyond the simplistic breakdowns of society to the nuances of human existence. Her most well-known novel The Left Hand of Darkness (1969) made her the first woman to ever win the Nebula Award and Hugo Award for Best Novel. She went on to win the awards again in 1975 for The Dispossessed (1974) and several more times throughout her literary career.

In the obituary that The New York Times put together they mention that in addition to the other twenty novels she published she also wrote “a dozen books of poetry, more than 100 short stories (collected in multiple volumes), seven collections of essays, 13 books for children and five volumes of translation, including the Tao Te Ching of Lao Tzu and selected poems by the Chilean Nobel Prize winner Gabriela Mistral.”

Even the notoriously hard-to-please critic Harold Bloom lauded Ms. Le Guin as “a superbly imaginative creator and major stylist” who “has raised fantasy into high literature for our time.”

What Le Guin did for fantasy was make people recognize that it was more than just magic and wizards and dragons. Literary elitism when it comes to genre fiction was (and still is to a degree) notoriously dismissive. One of the things she did during the 2014 National Book Awards when given the Medal for Distinguished Contribution to American Letters, was accepting the honor on “the behalf of her fellow writers of fantasy and science fiction” who had been  “excluded from literature for so long” while literary honors went to the “so-called realists.”

Fantasy has a way of taking something simple and layering it to portray a different experience. In creating The Left Hand of Darkness, which is in many ways a work of gender studies and anthropology as well as fantasy, Le Guin has said: “I eliminated gender to find out what was left.” For those unfamiliar with the work, Left Hand takes place on a planet called Gethen, where natives of the planet are neither male nor female, but during reproductive cycles, they assume the attributes of either sex for a brief amount of time.

Throughout the story, she explores the relationship between Genly Ai of Terra (Earth) and Estraven, as Genly is forced to recognize the limits of his own understanding of gender and comes to appreciate the importance, and beautiful, in both masculinity and femininity. Le Guin always considered herself a feminist and while a lot of her protagonists in her early works are men, her books understand that part of feminism is challenging all types of gender expectations, especially toxic masculinity.

For Le Guin, language, words, and names had to mean something, and she thought it was important to take the time to get the names of characters right (a trait I definitely relate to). “I must find the right name or I cannot get on with the story,” she said. “I cannot write the story if the name is wrong.”

For me, as a writer and as a fan of science fiction and fantasy, Ursula K. Le Guin along with Octavia Butler, Connie Willis, and N.K. Jemisin reminded me that fantasy is not just a man’s game. We have the power to craft worlds and tell stories about our experiences and realities while weaving them into stories about alien planets, futuristic dystopias, or novels about time-travel.

Le Guin’s commitment to diversity, feminism, and just damn good storytelling cannot be overstated. I would highly recommend The Left Hand of Darkness or Changing Planes to anyone who is looking to check out her work for the first time. Her mind was a magical place and she chose to share that with the world.

Her legacy will carry on as one of the greatest minds in the genre and a groundbreaking example of women’s ability to craft stories. She was a true successor to the legacy of Mary Shelley. While she will be missed, she left behind a fertile ground for imagination.