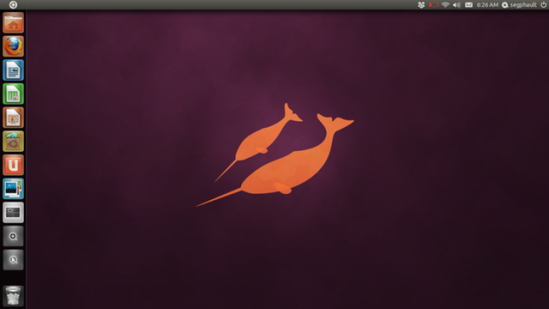 Originally developed for netbooks, Unity uses smaller screen real estate to the utmost. The refresh of the UI seen in version 11.04 breaks from the predecessors with a desktop version of Unity. Still retaining its smartphone-like usability, Unity is meant to bring greater ease of use and more polish to the desktop user experience. It’s also been bolstered with greater support for larger screens with the greater reliability and power that desktop users would expect.

Unity appears much the same as it did in previous versions — dock-like launcher to the left, menus along the top — but there are some important changes. Perhaps most noticeable is that the top menu bar has become a Global Application Menu. As in Mac OS X, when an application is launched its pull-down menus appear along the top menu bar rather than in-window. These functions are default, but can be disabled globally or on an application-by-application basis.

Natty Narwhal also brings new panels called “Lenses,” formally “places,” that allow users to view application data and search through it quickly. For instance, a lens for the social media application Gwibber allows you search and view tweets and messages. Search is a focus of the refreshed Unity, with Lenses and other baked-in search options that can look through both web and application data.

The new Unity has a strong eye for design, offering a slick new look to the Ubuntu software center, where users can browse, download, and update Linux software. Though the software center has been a part of Ubuntu for some time, the new design aims to attract users and developers both to the large and often under appreciated catalogue of open source software. Some default applications have also been changed, such as Rhythmbox being ditched in favor of Banshee as the default music player.

Of course, long-time Ubuntu users may be put off by these changes and the Unity’s relative lack of customizability. Unity is, of course, one of many of the UIs available in the 11.04 version. Users can always default back to a more classic environment. Though Natty Narwhal may rustle a few feathers, its polish and design could bring in some new converts to the Linux tent. And with a growing number of devices running Ubuntu, Unity is aiming to provide a powerful and consistant experience regardless of the platform.