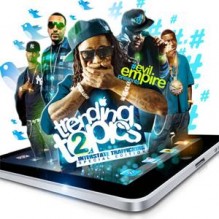 It’s no great secret that even after building one of the hottest social networks online, Twitter still hasn’t quite figured out how to monetize what they’ve got. They had a big break in getting $25 million from Microsoft and Google for the privilege of indexing their Tweets, but that’s hardly a sustainable source of revenue. But their latest strategem, as reported by Peter Kafka, doesn’t quite sound like a winner: Charging advertisers “tens of thousands of dollars” to buy an exclusive slot on the Trending Topics list. Peter Kafka reports:

he basic gist seems to be this: Advertisers will be able to insert their own term into the list of trends that Twitter displays on users’ home pages (see below) and on its login page. Clicking on that term would call up a Twitter search results page, which would feature that advertisers’ “Promoted Tweet” at the top of the results.

And he got the following confirmation from Twitter PR head Sean Garrett:

As we have always said, we plan to test different advertising and promotional models in these early stages of our monetization efforts for both user and brand value. As part of this effort, we will likely test trends clearly marked as “promoted” for an undefined period of time. Assuming that we do, during this test, there will only be one visible at a time. [Emphasis added]

While the “only one visible at a time” stipulation is a good start, lest the column be captured by spammers and thereby rendered useless, it still raises a few questions: For one, would everyone worldwide get the same sponsored trend, regardless of context or location? (And if not, could Twitter really justify charging tens of thousands of dollars?) For another, the great number of Twitter users who check the service out via third-party clients like TweetDeck and Seesmic has got to chip away at the usefulness of such a measure. For yet one more, it seems hard to extrapolate from current trending topics behavior how users will respond to ‘promoted trends’: Though Twitterers freely praise brands and companies they like on the service, they’ve been finnicky about anything that smacks of payola in the past.

We certainly don’t begrudge Twitter the right to monetize the impressive service that they’ve built, nor the right to experiment, but this doesn’t sound like a winner from either a user’s or an advertiser’s perspective.

(via MediaMemo. Title image via an unrelated Evil Empire mixtape.)