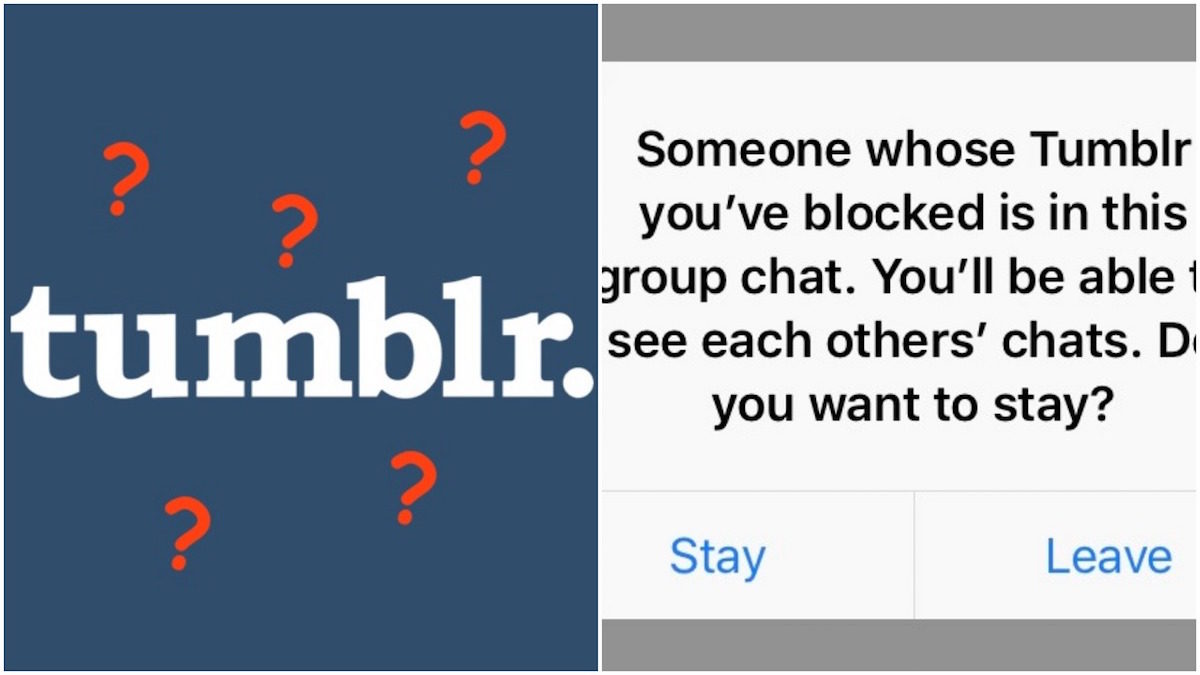 I made the mistake of clicking through to Tumblr’s explanation post for their brand new group chat feature. It’s … not great.

Tumblr is way behind in the group messaging arena. Twitter has had the feature for years, and many Tumblr users have been using Discord in increasing numbers to get their group chat fix while still maintaining the anonymity of a screen name. So I wasn’t surprised to see that Tumblr had finally introduced a group feature. They announced this, as they do many things, by way of a shiny gif embedded on the top of the dashboard when you log in or refresh.

There is, however, one caveat. They decided to make these group chats public, which is the strangest policy choice I’ve seen in more than a decade of working for and writing about online communities.

Tumblr’s well-written post starts out just fine—it’s in a funny format about introducing the announcement as “bad news” and goes on to explain how the chat function works. Anyone can start a chat, chats can have up to 100 members, the chat creator can add or remove members. All of this is pretty routine. Then:

The only good news we can give at this time

Group chats must be a friendly and welcoming space for everyone. When you create a group chat, you become the sole owner and are responsible for how it is run. You alone can invite new members and accept or deny incoming requests to join. Just remember: group chats are publicly viewable, and while only members may participate, anyone on Tumblr can see its contents.

Yes, you read that right. Group chats are publicly viewable to anyone, even if they’re not a member. This is not group chat, which are by nature private. This is an open chatroom, circa AOL 1998, only you have to be approved to join. The idea of a public chat in and of itself isn’t terrible. But there’s no way this should have been the default, with no option to turn it off and keep the content private and unfindable.

You can click on a new icon in the app and see a few chats that are automatically suggested based on your other interests. Possibly.

You can also, in theory, search for them by topic (I have not seen this in action, as Tumblr’s app search function is, to put it mildly, horrifically, comically bad).

So even if you’re not an accepted member of the chat, you can see its entire contents. For me, this negates the entire purpose of group chats, especially if they’re moderated and it’s up to a mod to add members. It feels like this was done for that “group chats must be a friendly and welcoming space for everyone” pipe dream—the hope that content will somehow be kept free of violation because it’s publicly viewable, and that chat owners will work to self-police.

But wait! There’s more! Anyone at all can choose to try and police your chat.

As the owner of a group chat, you possess the power to remove any member or message you feel needs to be removed. However, you do not need to be the owner or even a member to report a violation of our hate speech policy or other aspects of our Community Guidelines. Reports will be properly dealt with by our Trust & Safety team.

Full disclosure: I worked at Tumblr on that incredibly hardworking Trust & Safety team (which is staffed by good and beautiful people). I cannot even begin to imagine the mind-boggling amount of reports that will be filed for purely malicious purposes, or because one person’s favorite content is another person’s hated topic, or because of hurt feelings over not being let into a chat or getting kicked out of it. It’s like Tumblr has created walled gardens (where everything must be clean!) where you can peer over the wall at gathered cliques and spy on them even if you are unwelcome. What the actual fresh hell is this?

Wait, there is yet still more. People you’ve blocked can join chats you’re in, and they’ll be able to see your messages. They’ll be able to see your chat content without even joining the chat, because everyone can view the chats. This raises serious concerns, especially in instances where users have blocked others because of harassment, stalking, or other dangerous behavior.

Tumblr had me nodding along with group chats until the “they’re public!” kicker. (Not to mention, there’s still no way to privately message more than one person on the service.) This makes bafflingly little sense, and users have been reacting all day with confusion, anger, laughter, and memes. This was not the way to lure anyone back from Discord.