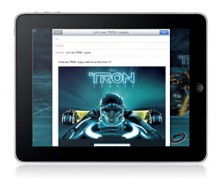 Early reviews of TRON: Legacy have been mixed, but Disney seems intent on making the movie into a full-blown cultural event, and it’s been doing a pretty good job, inspiring waves of fan nostalgia, more lightcycle tributes on the Internet than you can shake a stick at, and even a TRON-inspired Playboy shoot.

Now, TRON: Legacy is pioneering a new advertising format: iPad-specific iAds. Ad Age says the format will be launched widely in early 2011, but TRON: Legacy is getting the first crack at it.

The full-screen “Tron” ad, which will run in iPad apps such as TV Guide, includes close to 10 minutes of video, images from the movie, a theater locator with showtimes, and a preview of the movie soundtrack with the option to purchase on iTunes without leaving the ad. For the first time in any iAd, users will also be able to send email straight from within the ad.