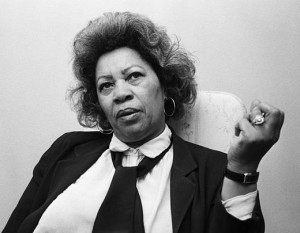 Toni Morrison has never written her memoirs, and if you’re a fan of the author, you’ve probably always wondered, “Huh. I wonder why Toni Morrison has never written her memoirs.” Well, she was going to, had a contract with a publisher and everything, but then, as she revealed to Oberlin College students in a recent talk, she abandoned the plans completely. Why? Because Toni Morrison finds her life story to be “boring.” She’s more interested in creating all new characters with all kinds of experiences, thankyouverymuch. But yeah … Pulitzer Prize, Nobel Prize, American Book Award, once called “the nearest thing America has to a national novelist” … booooooooring.

Indeed, one of America’s most celebrated authors, who was born into a working-class family in Ohio and went on to write some of the most influential books about the African-American experience, as well as become the first black woman to win the Nobel Prize for Literature, doesn’t think her life is worth writing a whole book about. Instead, she chooses to channel her creativity into fictional characters and stories, perhaps drawing from her own experiences without interpreting them directly. Because, you know, that would be boring. And in case you think the publisher may have concurred with Morrison and did the canceling, you would be wrong. Morrison canceled the contract.

“My publisher asked me to do it, but there’s a point at which your life is not interesting, at least to me. I’d rather write fiction.”

So Toni Morrison is saying “meh” to Toni Morrison. Hey, it’s great to be humble. And while some of us might feel like we’re missing out on real-life stories that made Morrison the woman that she is, she would prefer we honor what she’s given us — her talent — rather than just the things that happened to her. And that makes sense. Someone with a knack for creating imaginary people and getting deep inside their heads and thoughts as if they were her own (which, as every writer will tell you, they’re always kind of your own). But also consider Morrison’s take on the age-old adage “write what you know”:

So, Morrison’s life is probably not “boring” — it’s just not as much of an adventure for her than the unknown is. And that makes her quite the badass, doesn’t it?