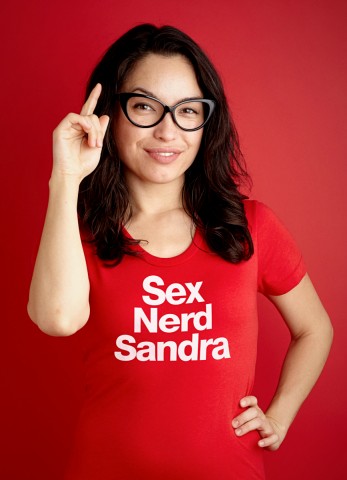 I’ve mentioned the upcoming digital series Incredible Girl here at The Mary Sue before*. Today, this feminist, sex-positive, LGBTQIA-inclusive series has a big announcement that may especially appeal to the podcast fans among you. Sandra Daugherty, aka sex educator and podcaster Sex Nerd Sandra, is joining the cast!

Daugherty is taking on the role of Maryann, Sarah’s best friend since childhood, and her strongest link to her Southern Baptist community. De Blas thought she was an ideal, if unorthodox choice for this particular role, saying, “I think Sandra is an amazing addition to Incredible Girl. I’m so excited she’s come on board. One, she’s in line with the ethos of the project, which instantly drew us to her. And two, if you’ve ever seen her in a video (or met her in real life) she’s instantly likable and when we screen tested her, that charisma doesn’t go away. I anticipate she’ll gain many more admirers after seeing her in the role of Maryann!”

A larger goal of the show, in addition to hopefully being entertaining, is to show mainstream viewers that those involved in the kink/BDSM scene are just normal people exploring their sexuality in a different way, and that participants in the scene are diverse—racially, ethnically, and with regard to body type/physical ability or reasons for being involved in kink—as well as show that monogamy isn’t the only way in which to have a lasting relationship, that gender isn’t cut-and-dried, and that it’s possible to find a balance between extremes.

“Why did I say yes? Because the script was so good and they’ll only give me the rest of the story if I join the cast. Yes, it’s a captivating, grounded story. Kinda reminds me of Juno. If you read this script, you’d say yes, too!”

*I’m an Executive Producer, co-creator, and writer on this project. Not trying to hide that! But TMS thinks this show is relevant to your interests as readers who support more women in film and television, feminist stories, and greater diversity and inclusion in media.

If you’d like to find out more about Incredible Girl, or help bring the series to life, CLICK HERE. It’s content that seeks to give those marginalized by their gender or sexuality a voice, and I hope all of you will join us on that journey!