Max and The Flock are back! 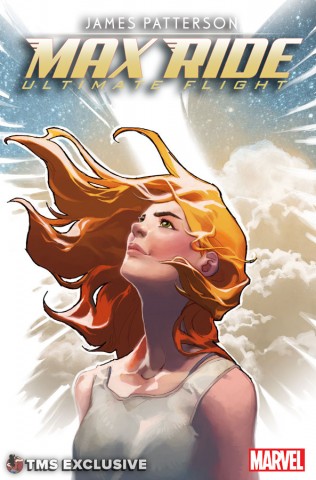 Max Ride: First Flight was an awesome comics adaptation of the first book of James Patterson’s Maximum Ride YA series of novels about a girl named Max who, along with her chosen family of fellow orphans has been experimented on and genetically enhanced against their wills. If you loved the first installment, get ready for more! Marvel has announced exclusively to TMS that they will be doing a second story arc in the series – Max Ride: Ultimate Flight, which will adapt the second novel in the series, School’s Out-Forever! Max and The Flock are back with an all-new creative team!

Taking over for Sana Amanat is editor, Emily Shaw, and she’s working with writer Jody Houser, and artist RB Silva to bring us the next installment of the Max Ride story. Though the comics are adaptations, Shaw and her team are working hard to make the story their own. Indeed, the characters are already aged up from the novels, and the story has already diverged from the source material a bit.

Shaw was excited to take over the title from Amanat, but apparently, Amanat is still a part of the process. Says Shaw, “[Sana’s] consulting on the series and so it’s been a fairly seamless transition of leadership. From my end, I really enjoy working on titles that reach a new and different audience from the typical Marvel fan. In that vein, I edit the ABC graphic novel adaptations and work on the Disney Kingdoms titles so in a lot of ways this project is in the same family. I also love YA fiction so it feels like a natural fit!”

Meanwhile, Houser was thrilled to be asked to take over after Marguerite Bennett‘s successful run on First Flight. Houser explains, “Marguerite Bennett, who did an amazing job on the first volume, wasn’t able to write the second due to her current workload (I believe she’s working on seven titles right now!) so I was asked to take on writing duties. I’m a big fan of licensed books that bring younger readers into comics. That plus the chance to work with Marvel again made this a no-brainer.”

“Both Jody and RB have been a dream to work with so far,” Shaw says, very happy with her new team. “There isn’t a ton of editing needed really – they both have such a natural feel for the world of Max Ride and the characters that live in it. Jody did a killer job adapting the Orphan Black tv show, so this was very much up her alley. And RB draws great young people. They really make the job easy!”

As for what we can expect from Max Ride: Ultimate Flight, Houser explains, “Ultimate Flight does pick up where First Flight left off. The search for their parents plays a major role, but it’s derailed quite a bit, as anyone who’s read School’s Out–Forever can attest to. There are some exciting things in store for the Flock! Maybe a certain dog too…” Shaw continues, “We’re taking the Flock out of their comfort zone and into an environment that’s familiar to most kids – but very threatening to this group. We’ll see Max continue to grow as a leader and really come to terms with what it will take to protect the people she loves. Oh, and there will be romance. Definitely.”

Hell yeah! After that kiss in First Flight, I’d hope so! /squeeing

I’m a sucker for young superhero teams. Adults like The Avengers are great, but there’s something about young people dealing with both super powers and growing up as people that really gets me. Both Shaw and Houser seem to feel the same way, and find a huge value in telling stories about young powered people.  According to Shaw, “There are so many valuable stories that come out of a character learning to be a hero – I mean look at Peter Parker! Sure, the grown-ups can have their big, epic adventures but I find that often the characters that a reader can relate to the most are the young heroes. The ones who are still trying to figure out who they are and what things are important to them.”

For Houser, the need to tell the stories of young superhero teams seems to be more personal. “I think a lot of it boils down to representation,” she says. “Seeing heroes who look like us give us an example to aspire to. It show us possibilities of what we can be, what we’re capable of. More importantly, seeing versions of ourselves in stories shows us that we matter. When you’re always relegated to the background or ignored completely, it’s like being told you’re not “normal”, that who you are doesn’t count. It’s important at any age to be shown that there’s no such thing as a default human being and that you do have a place in both fiction and the real world.

Beyond all that, I know I never played at being a sidekick as a kid. I always wanted to be the hero. And I would guess that still holds true for plenty of kids today.”

Now, being that this is now a Marvel title, I wondered about the possibility of Max Ride interacting with, say, the Runaways, or Ms. Marvel (I think Max and Kamala could totally hang!); but it looks like I’ll have to write my own fan fic about that. Shaw says, “The Max Ride series is going to be separate from the Marvel Universe – it’s the James Patterson universe! And being able to play with those characters and explore that universe is such an honor!”

However, Shaw also has high hopes for the book, and hopes this limited series could eventually be an ongoing title. “We’re hoping that fans really love this world we’re building and want to spend more time in it,” Shaw says. “There’s unlimited story potential here.” Regardless, Houser would love to work on the next round, “I’m really enjoying working on the series so far and would love to tackle adapting the third book at least, since it’s such a direct continuation from the second.”

If you haven’t yet read Max Ride: First Flight, definitely check it out wherever you buy Marvel books. It’s a great read for anyone who loves nuanced female characters, intriguing sci-fi, and stories about young heroes. Then, get excited for Max Ride: Ultimate Flight, coming in November!