Tiny Robot to Tackle the Ironman Triathlon | The Mary Sue 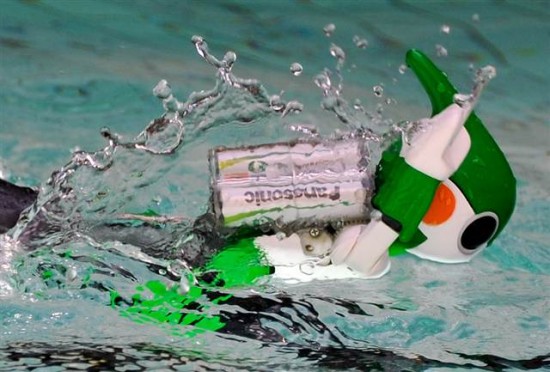 People who can actually finish the iconic Ironman triathlon are practically machines, but now, an actual robot is going to attempt the same feat. The robot in question is Panasonic’s Mr. Evolta, created by Tomotaka Takahashi and mascot for Evolta AA and AAA batteries. Unlike the Energizer Bunny which just claimed that it kept going and going, Mr. Evolta plans to prove it’s endurance by completing the Hawaii Ironman.

As awesome as it would be, Mr. Evolta won’t be running with actually human contestants or held to the same standards. Instead, a number of concessions have been made to give the robot a comparable experience.  Since Mr. Evolta stands a scant 6.7 inches tall, it would be unreasonable to expect him to finish the race in standard human time. Instead, since he stands at approximately 1/10th the height of a normal person, he’ll be given ten times the amount of time to finish the race, about a week.

Also because he is tiny, he’ll be running the race after the Ironman proper is over. You don’t want anyone stepping on him. Lastly, Mr. Evolta will be completing the race in 3 different forms; he has a running model, a biking model and a swimming model each of which will perform its leg exclusively.

From what I can tell, Mr. Evolta is not exactly remote controlled, but not completely pathfinding either. It appears that he will follow some sort of transmitter orb or wand that’s placed in front of him, so someone is going to have to walk him all the way through the course. At least he won’t get lonely. Of course, Mr. Evolta isn’t attempting this without having trained intensively. In the past, he walked from Tokyo to Kyoto and also scaled the grand canyon. Best of luck to the little fella. I’ll be interested to see what he’ll be up to next. 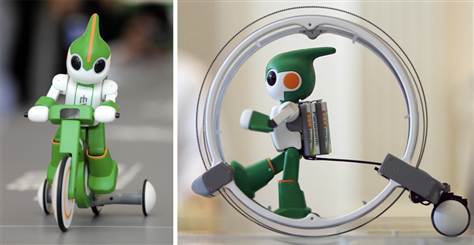