Should Black Mirror's 'USS Callister' Get Its Own Spin-Off TV Show? | The Mary Sue

Things We Saw Today: Should Black Mirror’s “USS Callister” Get Its Own Spin-Off TV Show? 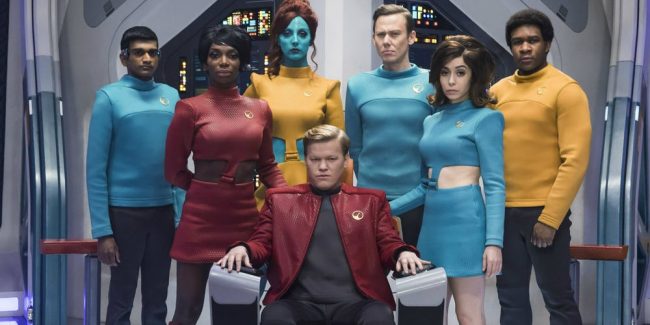 The most buzzed-about episode of Black Mirror season 4, which many of us binged over the holidays, is the Star Trek send-up “USS Callister.” Its director thinks the episode has the potential to be more.

“Callister” is a fascinating bit of television that I was excited to watch because of that aforementioned buzz, and because I’m a fan of both Star Trek and Black Mirror. It’s incredibly well done as well as vastly disturbing, and for Star Trek fans there’s an extra, winking layer of resonance. For me, the end was satisfying and pretty much perfect, but some cast and creatives would be on board for it to actually be the beginning. The episode’s director, Toby Haynes, called it “probably one of the best pilots for a space show ever,” or in the Callister‘s case, a show about sentient digital clones ready to explore the vast world of an MMORPG and beyond.

Okay, the more I think about this the more I realize I would watch the hell out of some ongoing voyages of the USS Callister.

Cristin Milioti, Lt. Cole herself, seems like she’d be more than happy to reprise the role. In an interview about her trailblazing part, she said:

I would die if they turned this into a spinoff series because I do want to see that group of people figure it out, because it’s so real. They’re very funny and very dysfunctional, but it’s also a group of coworkers from an office — it’s like The Office in space. They’re stuck in this thing they didn’t even create and they would just have to battle aliens. It’s such an incredible concept. Maybe that’s wishful thinking on my part, but I would love to see that.

Do you think the episode should stand as a one-shot or would you be on board for more? (via Syfy Wire, image: Netflix)

James Bond producer says next 007 could be black or a woman. https://t.co/n027vcn27W pic.twitter.com/AIm0jOMVwx

So what did you see today while trying to keep warm, my friends?