Things We Saw Today: The Updated Pirates of the Caribbean Ride’s Redhead Is Here, and She’s Spectacular

We previously reported that the Disney “Pirates of the Caribbean” ride was getting a much-needed update: the “Auction” part where chained women were available to the highest bidder was getting scrapped. Even better, the standout redhead of the scene would become a pirate herself. Now she’s arrived at Disneyland Paris.

In the video above, you can watch the updated ride, and we have to say the Redhead is looking fierce as hell with her sash of pistols and flamboyant hat. As a reminder, this is what the scene used to be: 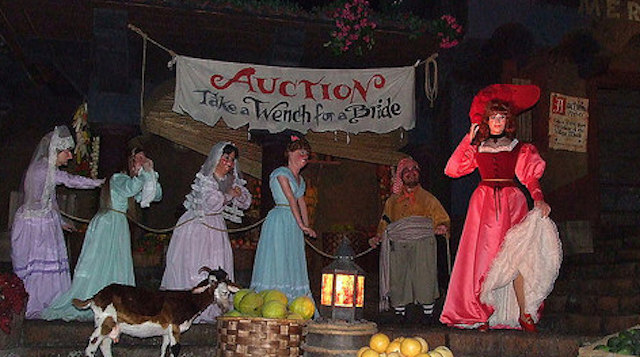 As Vivian mentioned in her article, some people were unnecessarily upset about the parks messing with their sexist nostalgia, as though there weren’t some truly legendary female pirates throughout history. Sorry that there’s no more wenches for sale in Paris, boys and girls. It’s time to grow up. The updated scene and the commandingly badass lady pirate will be rolling out at other Disney theme parks the next year. Someone tell the first commenter on this youtube video, who wrote, “Terrible. Unnecessary change. Nice going Disney,” that everything is going to be okay even though women are now visibly pirates too and no longer at auction.