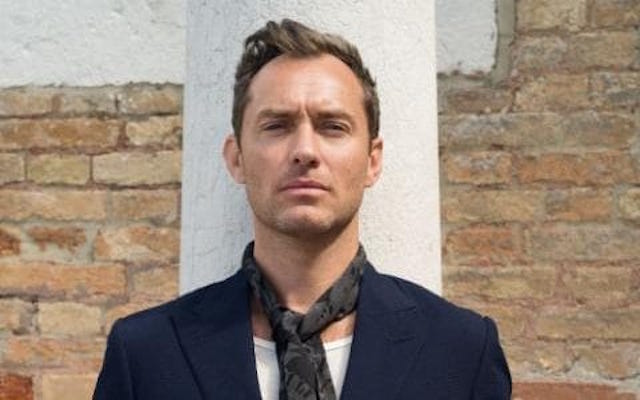 According to Variety‘s report, Jude Law is attempting to become the High King of the Fandoms, signing up for the MCU following his turn as Albus Dumbledore. What’s next, Jude? Will you reveal yourself as Rey’s father in Star Wars?

I am actually as down with this Captain Marvel casting news as I was with Law’s revealed Fantastic Beasts look, because I like Jude Law quite a lot! Variety is saying that Law is still “in talks” for the role, but also titled their article “Jude Law Lands Male Lead Opposite Brie Larson,” so they seem pretty confident about it. (The Captain Marvel Wikipedia has already been updated with the news.)

Law would play Dr. Walter Lawson, the “original” Captain Marvel, who went by Mar-Vell (got it? Marvelous). In his first comics appearance in 1967, Mar-Vell was a defected Kree alien mercenary officer, but there’s no way to know if Captain Marvel will take him along that route. In Kelly Sue DeConnick’s Captain Marvel comics run in 2012, Dr. Lawson was again a friendly alien, who shielded Carol Danvers from the transformative explosion that gave her powers and basically dies saving her. So there’s a lot of history and potential to make this dynamic super-interesting.

In the cinematic Captain Marvel, Air Force Pilot Carol Danvers suffers an accident that fuses her DNA with an alien’s, and she ends up with superpowers as a result. Variety describes the Mar-Vell character as “a mentor of sorts to Danvers as she tries to figure out her new powers.” Let’s hope he continues to stay alive in the movieverse!

Other things that we know about Captain Marvel so far: it’s set in the 1990s and it will be Carol Danvers’ first MCU appearance, as Avengers 4 comes out after Captain Marvel. Rogue One baddie in a great white cape Ben Mendelsohn has been cast as a villain, and Samuel L. Jackson has been confirmed to turn up as ’90s Nick Fury. The movie is directed by Anna Boden and Ryan Fleck (Half-Nelson), and its script is in the hands of several cool ladies. And we are getting more and more excited about it.

Happy almost-Thanksgiving, spacefriends! We’ve cooked up some fun and seasonal posts for you tomorrow, so escape to The Mary Sue’s warm embrace whenever you get tired of your relatives or turkey.