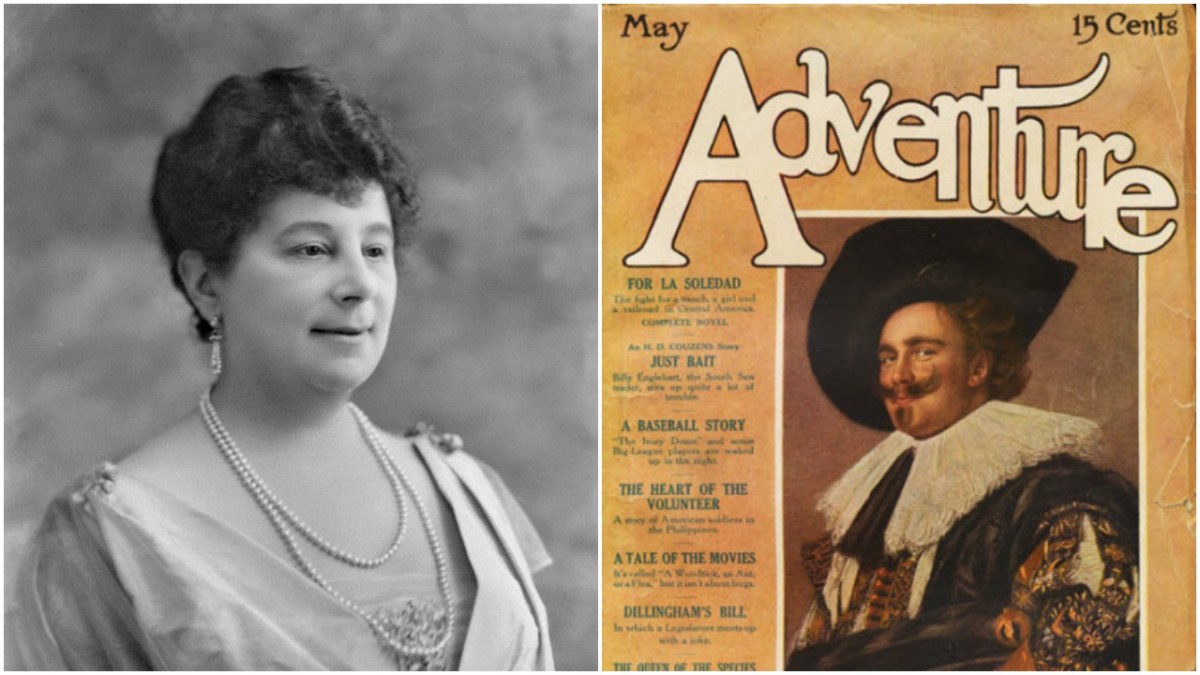 There are so many ingredients in the mix for the modern superhero. We’ve been telling stories of people with magical powers and inhuman strength as long as stories have existed, but the modern superhero is more than that. They fight for right and often do so while hiding their super life from regular people, to both protect themselves and their loved ones. It may even be the element of the secret identity that set the stage for the modern comic book superhero. And that idea was invented by a woman: Baroness Emma Orczy.

If you haven’t heard of Baroness Orczy, you may have heard of her most famous literary creation: The Scarlet Pimpernel, the heroic English Nobleman who affects a foppish persona to shield himself from suspicion when he begins a campaign to save those facing the Guillotine during the reign of terror. And this all came from the mind of a woman who grew up dreaming of romance and adventure.

Emma Magdolna Rozália Mária Jozefa Borbála Orczy de Orci was born in Hungary in 1865 to a wealthy family, which shouldn’t be a surprise given the whole “Baroness” thing. Her father was Baron Felix Orczy, a composer, and conductor, and arts and culture were a large part of her upbringing and early life as she traveled the continent (her parents left Hungary out of fear of revolutions), eventually landing in London when she was 15. As a child, she had a romantic bent and loved stories, disguises, and adventure.

All of this, including that whole fleeing an uprising, would deeply influence Orczy, who friends and family called Emmuska. As a child, she always played the hero. She later wrote in her own biography, “in a childish, obscure way, my imagination was already then at work on doughty deeds of valor, on noble heroes, dare-devil adventures and on hapless victims of cruel persecutions…” But it wasn’t until she was older that she began writing seriously.

Despite her noble title, by the time Baroness Orczy was married to English illustrator Henry George Montagu MacLean Barstow, she was not wealthy. After the birth of her only child in February of 1899, Emma turned to writing to help support her family. But, living in London in the 1900s, the literary adventures she created were all under the shadow of Sherlock Holmes. So she created something very different.

After a trip to Paris in 1900, she was inspired to create a story with the backdrop of the Reign of Terror, and then, according to her, the character of The Scarlet Pimpernel came into her imagination.

I first saw him standing before me – don’t gasp, please – on the platform of an underground station…Now, of all the dull, prosy places in the world, can you beat an Underground railway station? But I give you my word that as I was sitting there, I saw – yes, I saw – Sir Percy Blakeney, just as you know him now…I saw him in his exquisite clothes, his slender hands hold up his spy-glass; I heard his lazy, drawling speech, his quaint laugh…it was a mental vision, of course – but it was the whole life story of the Scarlet Pimpernel that was there and then revealed to me…my thoughts were clear enough for me to tell my beloved husband about the wonder that had occurred; the birth of the Scarlet Pimpernel.

The character proved as intoxicating the audiences as to Orczy. Sir Percy, the Scarlet Pimpernel, first appeared in a play based on Emma’s short stories, in London’s West End in 1903. At the same time the play began to gather attention, the novelization was published and the character slowly caught on. Orczy would eventually write over a dozen sequels, the last published in 1940. But the lasting impact of her imagination was even bigger.

Sir Percy Blakeney is a master of combat and disguise, but he hides his true nature by pretending to be a completely different kind of person, so ineffectual that no one would suspect him of being “The Scarlet Pimpernel.” It’s a model that was adopted by Zorro, the Shadow, and eventually, Superman, Batman, and a thousand other superhero characters. The Scarlet Pimpernel himself has appeared in dozens of movies, television shows, parodies, and plays. My favorites are the Frank Wildhorn musical that debuted in 1997 and of course, Daffy Duck’s “Scarlet Pumpernickel.”

Emma Orczy died at age 82, having changed the face (or mask we might say) of popular culture in ways that went far beyond her literary success. She sounds like a lot of women and writers I have known, who grew up as dreamers and took on the hard work of making their fantasies work for them. She was in her own way a bit of superhero, cool name and all.