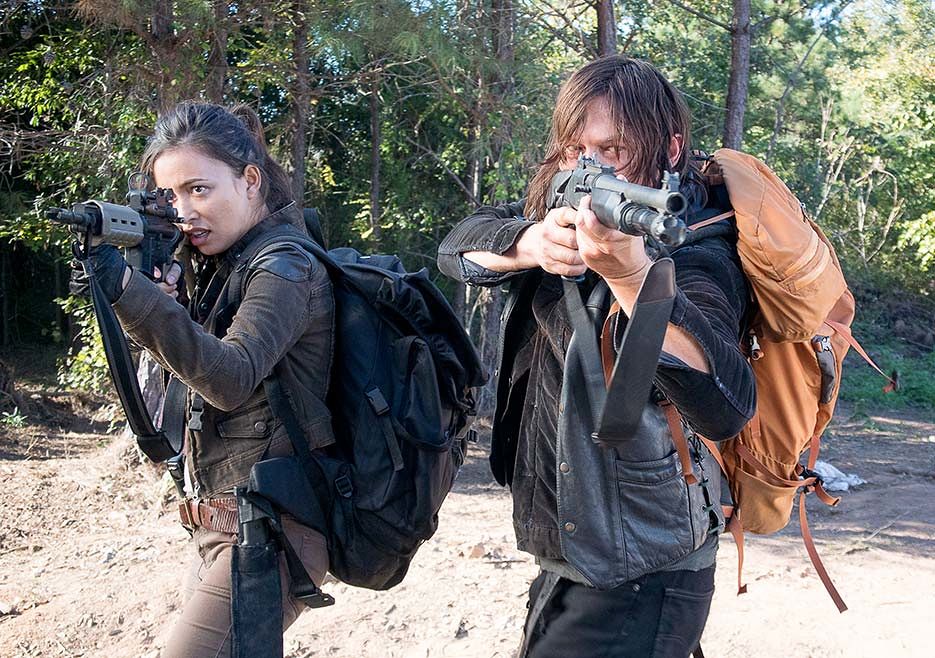 Last night’s episode of The Walking Dead would likely have been controversial regardless of when it aired, but it’s particularly contentious considering the recent criticism leveled at similar shows. Spoilers for The Walking Dead and The 100 to follow.

Earlier this month we wrote about the death of Heda Lexa on The CW’s The 100, and the fan grief and outrage over the series’ decision to kill off a lesbian character. Especially considering that Lexa was killed soon after a love scene between her and Clarke, many fans feel that her death fell into the Bury Your Gays and Dead Lesbian Syndrome tropes, in which LGBTQIA characters, particularly lesbians, meet tragic, brutal deaths while hetero relationships are given happier endings. After the death of Lexa on The 100, Autostraddle compiled a list of 145 recurring bisexual and lesbian characters who have been killed off on TV, and how they died. Following last night’s The Walking Dead episode, that list rose to 146.

On yesterday’s episode, “Twice as Far”, Dr. Denise Cloyd (Merritt Wever) is killed by Dwight, who shoots her with the crossbow he stole off Daryl earlier in the season. Denise’s death comes two episodes after her girlfriend Tara told her she loved her. At the time, Denise didn’t return the sentiment, and deferred Tara’s offer to go on a supply run together. In last night’s episode, she goes on a run with Daryl and Rosita in a bid to prove her courage, and finds a can of Crush, a favorite drink of Tara’s from before the world ended (in earlier episodes, much has been made of Denise’s quest for some Crush). Denise tells Daryl and Rosita that her fear has held her back from taking chances in the past: “I could have gone with Tara. I could have told her I loved her but I didn’t because I was scared.”

Equipped with this gift for her girlfriend and newfound insight into their relationship, Denise launches into an impassioned speech about taking chances, during which she is shot through they eye by Dwight. It takes the audience and the character a moment to absorb what’s happened, and Denise lives just long enough to finish her sentence.

It’s Abraham who’s killed with an arrow through the eye in the books, and, as Vanity Fair’s Joanna Robinson puts it, the show had to resort to some plot contortions to give that death to Denise instead:

The comic book version of Denise does die, yes, but a little later on down the line. And while being a lesbian doesn’t mean a character should be bulletproof—anyone and everyone should be ready to die on The Walking Dead—the writers did decide to swap the gay character in for the straight, white alpha male. They had to do a lot of plot contorting to get there, too. In the books, Denise dies while rushing to medically assist a friend from inside the walls of the compound. In the show, she dies out on a supply run trying to prove—like Eugene does elsewhere—that she can face her fears.

What’s interesting to me about The Dead Lesbian Trope in the context of The 100 and The Walking Dead is that both shows are relatively decent in terms of LGBTQIA representation, at least at first glance and when compared to the TV landscape overall. Tara doesn’t have a correlating character in the comics, meaning The Walking Dead show went out of its way to have queer representation, source material be damned. Denise is actually straight in the comics (and ultimately does meet a tragic end there as well, sacrificing herself to save her husband, Heath). The Walking Dead had a controversial kiss between two male characters last season, and the newly-introduced character of Jesus is also gay. Similarly, with the notable exception of Lexa’s death, The 100 has also had more positive, explicit queer representation than most shows on TV.

Both series also belong to a genre that some people argue should be exempt from criticism about characters’ deaths. Given that both shows are post-apocalyptic, the logic of some viewers is that all bets are off, and we (LGBTQIA fans) should be content with the fact that queer characters existed in this series in the first place: “this is The 100/The Walking Dead/insert brutal genre show here, you should be ready for anyone to die at any moment!”

But the unpredictable, unique worlds of those series shouldn’t be used an excuse for shows to trade on progressiveness while thoughtlessly reinforcing homophobic tropes; if anything, the volatility of both shows makes me less inclined to accept dead lesbians as the inevitable outcome of either world’s given circumstances. If anything can happen, why is the thing that winds up happening the exact thing that we’ve seen over and over and over again—if not on that specific show, then in media overall?

In some ways, I’m reminded of the criticism Fear the Walking Dead received for killing off Black men. Yes, Fear the Walking Dead is a violent, trigger-happy series and fans should expect everyone to die, but it’s not everyone that’s dying, at least not first; it’s the characters that, historically, have always been disposable on TV. Why Black men? Why a lesbian character on the cusp of romantic fulfillment, especially when the series had to go out of their way to give her Abraham’s death?

The Walking Dead‘s season isn’t over yet, so I guess it’s possible that the next few episodes could shed some insight into why Denise was killed and Abraham was not (that’s assuming the answer isn’t just “we needed to kill Denise to further Daryl’s character development”). Denise’s death alone wasn’t unforgivable in the world of The Walking Dead (the show) for me, but it’s part of a concerning and undeniable overall trend on TV, and I’m really hoping that the show is particularly careful about how it writes Tara going forward.

Speaking to The Daily Beast, Merritt Wever, who says she was aware the death was coming because the show “only wanted [Denise] for one season,” has already addressed her character’s death in the context of the Bury Your Gays trope. Via The Daily Beast:

There’s been controversy lately over the frequency with which queer female characters on TV are killed off. Another show, The 100, recently killed off a lesbian character and it’s a trope that goes back to Buffy the Vampire Slayer and even older shows. I was wondering how you might feel about fans worrying that Denise has now fallen victim to the same trope.

That’s interesting, I hadn’t thought about it that way. I’d known that this was gonna happen when I signed on, but I never felt like I was somehow not being valued. This was always the plan. And I think in the comic book, I think [Denise] is with a man. I think that they specifically wanted to build a relationship for Tara. But that said, I understand if viewers watching the show really identify with the character or like seeing themselves or some part of the world that they know is real and true and valid and prevalent represented. And then to have that taken away, I definitely see how that would be disappointing in the broader scheme of things. I’m not sure that that’s what was going on here but I understand the sentiment very well and I am familiar with the [trope of] black characters or gay characters getting killed off because [they’re considered] less human or less real or less important and people aren’t gonna care as much. From my end, it didn’t feel like that’s what was happening though. But I certainly understand the concern in the wider culture.

I know this remark can sound dismissive, or is often used in place of an apology, but I am really glad we’re having this conversation. I think The Walking Dead‘s heart is in the right place in terms of representation, but it can be hard to see the forest for the trees; depending on the makeup of your writer’s room, it can be easy to focus on telling the story of one character “right” without questioning whether that story has been told before, or if this ending is one you could also imagine writing for a straight white man.

I’m optimistic that for shows like The 100 and The Walking Dead, these conversations will lead to change. It’s too late for Lexa and Denise, but not too late for either show to recognize that just because a series takes place in a world where lifespans are short and death, when it comes, is usually brutal, that doesn’t excuse reinforcing tired tropes. If anything, all-bets-are-off shows like these provide the ideal opportunity to do the opposite.