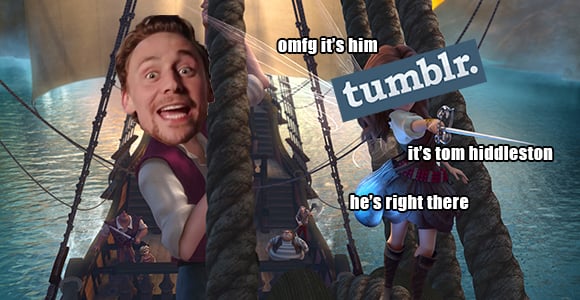 Why Tom Hiddleston followed up a string of successful indies and Hollywood blockbusters with a supporting role in the direct-to-DVD Disney movie The Pirate Fairy is a mystery for the ages. Was it the paycheck? The opportunity to sing in a Disney movie? Is he literally just that happy to do any kind of movie whatsoever? Can we expect infomercials next?

What we do know is that if Hiddleston’s in it, Tumblr’s freaking out over it. I say that with affection, not derision. But, like many Tumblr users (no, you cannot know my username), I carry around with me at all times a strong love of self-derision and satire*.

To that end, here’s the Official The Mary Sue Review ™ of The Pirate Fairy…as written by Tumblr. Or, well, “Tumblr.”

*In fact, Tumblr loves satire so much that it sometimes takes satirical news stories a little too much to heart.

The first twenty minutes of The Pirate Fairy are pretty bad, because there’s no Hiddleston in them. There’s a scientist fairy, and one of her friends is voiced by Our Lord and Mistress Lucy Liu…

…but there’s really only so much you can do with a lack of Hiddles in your movie, yanno? Until he shows up, I’m all

F*CK YOU AND YOUR ATTRACTIVE ANIMATED FACE, SIR.

He plays James Hook, aka Captain Hook. Only Scientist Fairy Zarina is the Captain here, not Hook. Which is OK, because he’ll always be Captain of my loins.

His evil plot, which we don’t find out until later, is that he’s using Zarina and her science know-how so he and his pirate crew can come to our world and pillage museums and historical landmarks. Honestly, I’m pretty sure he had a terrible childhood, so museums should just give him the priceless works of art. It’s not his fault he’s a thief!

And then something magical happens. Something not quite as magical as Hiddleston dancing, but close:

This movie is amazing. Tom Hiddleston’s face, even though it’s never on-screen here, is amazing. He’s not going to get nominated for any Oscars for this and THAT IS SO WRONG.

Zarina finds out that Hook took advantage of her friendless state after being ostracized from Pixie Hollow, and after he’s gotten what he wants he plans to lock her up and use her as a nightlight. Really, I think if she understood him enough she wouldn’t blame him for it. Then the other fairies come along to rescue Zarina and defeat Hook

…because HE CAN’T HAVE ANYTHING NICE IN HIS LIFE. He just wanted the d(ust, pixie). Is that so wrong?!

And now I take my Tumblr hat off for a serious mini-review. The Pirate Fairy is OK for what it is. The main character, voiced by Christina Hendricks, is a basically science nerd (or “Alchemy Fairy”) whose unusual area of interest is initially frowned upon by her community, but by the end of the movie both she and the rest of Pixie Hollow come to appreciate and embrace her unique talent. That’s a pretty neat thing to have in an movie directed at young girls. But, at the end of the day, this is still a direct-to-DVD Disney movie, and there’s not really much there for adults (unless you’re watching for Hiddleston, in which case, more power to ya). Which is OK, because there’s not supposed to be anything there for adults. Pixar or Wreck-It Ralph this ain’t. Rent this for your kids, but you might want to have a book or some Loki fanfic on-hand to read while it’s on.

Oh, and if you took offense at the Tumblr aspect of this review, I have one thing to say: