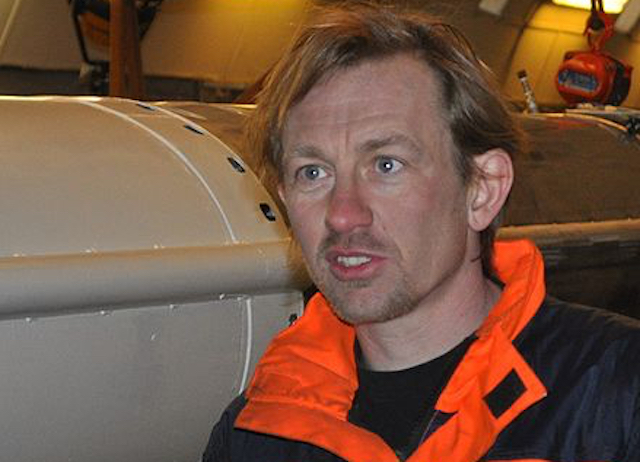 It sounds like the plot of an out-there murder mystery: an eccentric inventor and the reporter there to profile him board a homemade submarine. Only the man emerges. The woman goes missing. The man claims that he dropped the woman off. Then his story changes.

In an event that’s gripped Scandinavia, the disappearance of Swedish journalist Kim Wall is now being treated as a possible act of homicide. While the details of what happened to Wall might never be fully known, the Danish inventor Peter Madsen is being held for her death.

Madsen had maintained that he dropped off Wall—who was in Denmark to pursue a piece about him—on the Copenhagen docks on August 10th, after which she was reported missing by her boyfriend. But today the police revealed that Madsen’s account has shifted. Wall died onboard the submarine, the UC3 Nautilus, and Madsen chose to “bury her at sea,” then sink his own vessel. Per the New York Times:

Mr. Madsen now asserts that “that an accident happened on board the submarine which lead to Kim Wall’s death and that he subsequently buried her at sea,” the Copenhagen police said in a statement on Monday.

The disappearance has riveted Scandinavia, and Mr. Madsen’s new account appeared to raise more questions than it answered: If there had been an accident, why didn’t he call the police? Why didn’t he bring her body to shore? Why did he initially say he had dropped her off on land?

Of course, Madsen’s escalating lies and actions point to some measure of guilt. If he personally had no part in Wall’s death, why not return with her and explain the accident? If he was panicking that he could be culpable for an “innocent” accident caused by his submarine, did he really think that leaving both Wall and the vessel in the ocean was the smarter course of action?

Did he think that he was going to get away with it?

The Times calls Madsen, known in Denmark as “Rocket Madsen,” an “uncompromising” inventor who had hoped to one day become the first amateur rocket builder to reach space. They also mention Madsen’s known proclivity for arguing and his too-quick temper. It’s not hard to imagine that he lashed out or attacked Wall and then scrambled to cover his murderous activity.

Wall’s friend Victoria Shreve wrote a devastating article on her friend’s disappearance and the dangers that face intrepid female journalists: “There’s a dark irony in Kim, who traveled to North Korea and reported from Haiti, should disappear in Denmark,” Shreve wrote. “Perhaps it speaks to the vulnerability of female freelance journalists.” While every journalist knows the potential for danger in reporting from the front lines or under repressive regimes, there’s something particularly upsetting in knowing that Kim Wall died on what should have been the most innocuous of assignments.

The authorities are continuing their search for Wall’s body, and the submarine has been recovered and could yield further clues as to what happened.

In her piece on Wall—which I am Google-translating from Swedish—Shreve said: “We talked a lot about money when we saw. About performance anxiety. And about the future. She would move to Beijing this fall with her love, they had signed a lease to a dark little studio. She said I should come and greet and we would ride together through the old city. That she would come from Copenhagen and greet me in Stockholm this summer.” The last paragraph reads, “I think of Kim all the time these days. On her family. Because I want her to come to Stockholm soon and greet me.”