The Magicians Digs Deep Into Grief and Regret | The Mary Sue

You can't change the past. 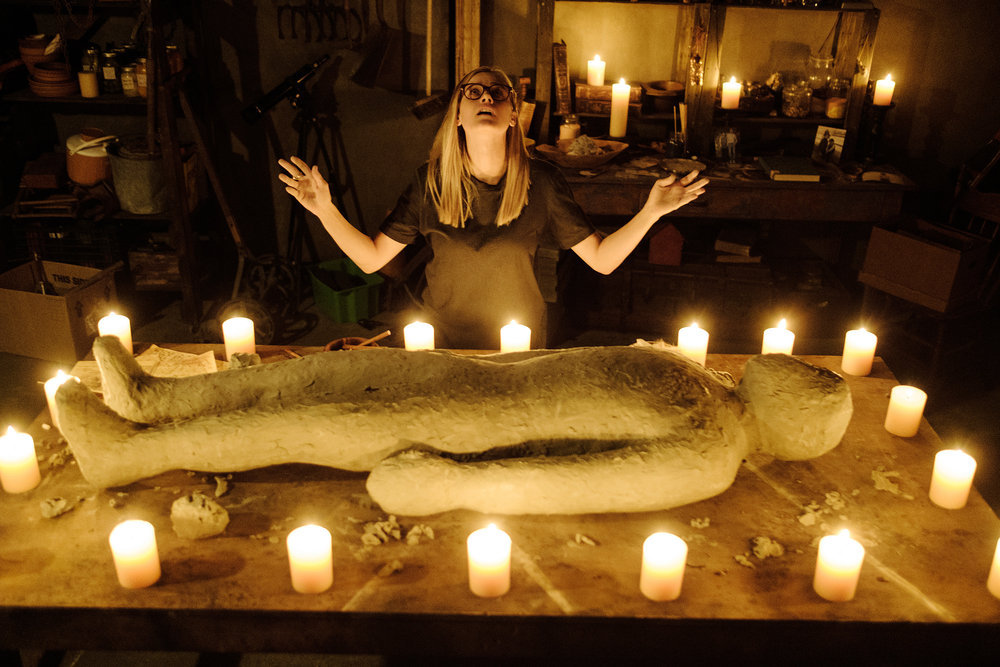 **Spoilers for this week’s episode of The Magicians!**

Most people would expect to be left weeping by an episode of television titled “The Wrath of the Time Bees,” but those people haven’t seen The Magicians. The SyFy staple returned last week for season five with a slow start but ramped things up big time this week with episode two. And by ramp things up, I mean pulled out our hearts and crushed them to bits.

This episode wasn’t just about the characters’ grief over the loss of Quentin Coldwater (Jason Ralph), but about all sorts of regret and wishing they could undo the past. But the lesson for everyone was that we can’t change the things in the past that hurt, even with magic; we have to live in the present with our choices and grief. Quentin was there to give this message—not just in spirit.

Well. He was sort of back. Following her mother’s instructions to “do something crazy” to cope with her grief over the loss of Quentin, Alice (Olivia Taylor-Dudley) used stolen life clay and a tiny piece of Quentin’s soul to animate a golem of Quentin. But, as with much magic on this show born out of grief and desperation, it went wrong.

Quentin didn’t come back as the Quentin we knew, but as a preteen version, played to absolute perfection by Luca Padovan, familiar to Sera Gamble-verse fans as Paco in season one of her other hit show, You. Alice created the Golem, she told herself, in order to ask Quentin a question about a mysterious spell she had found … but that wasn’t really why she needed him.

Alice was, and still remains, deep in her grief for Q, and despite what she told herself, she didn’t need to accomplish something; she needed the closure of saying goodbye. So did Julia. Both women are dealing with their pain in different ways, with Julia taking it as a purpose to drive her and Alice being suffocated by it.

But that’s why Quentin was there to give Alice the push into coping and moving forward. Alice’s heart asked for someone she could find some closure with. In an absolutely devastating and beautiful scene, young, Golem Quentin discerned that Alice didn’t actually want to solve the riddle Quentin left behind, because that would be the end of his story. But it’s just the start of Alice’s.

The theme of grief and the desire to undo the past ran all through the episode. Kady faced the shadow of her addiction as she solved the mystery of a night of lost time, and Eliot (Hale Appleman) and Margo (Sumer Bishil) tried and tried to fix the past in Fillory (that’s where the time bees came in) but learned it was impossible.

Eliot and Margo were, like Alice, confronted by shadows of people they lost: Josh (Trevor Einhorn) and Fen (Brittany Curran). These suffering ghosts were far more literal in some cases, though, be it a very perky dead Fen, who was hung for failing to save Fillory, or a trapped Josh. Margo and Eliot tried over and over to “Endgame this shit” and change what had happened … but it didn’t work.

The seeming solution to everything—the deaths of Quentin, Josh and Fen—came in the form of magic stamps that could send a letter to anyone at any time. It saved Josh and Fen, not by changing the past, but by bringing them to the present. But that didn’t happen until Margo gave up on them—something she’ll have to reckon with in the future.

Will Eliot send the letter to Quentin that he was revealed to have at the end of the episode? Will he risk undoing of Quentin’s sacrifice? Or will he finally just … talk about how much he loved Quentin and why he’s hurting so much?

As much as I’d love to see Quentin return, I’m loving how the characters are dealing with grief in different ways. The Magicians is a show about how even magic doesn’t give us easy answers to life’s messy questions and pain. As much as we wish we could undo the past, the only way to heal is to move forward.