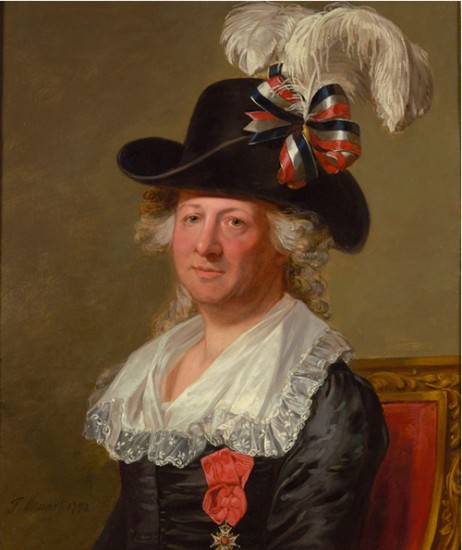 The portrait above isn’t just any old vintage picture. Recently sold at auction in New York City as a painting of “a woman in a feathered hat,” it’s actually thought to be the first known formal portait of a transvestite, the spy Chevalier d’Eon. The subject of this portrait is definitely a man, even though he lived the latter part of his life as a woman. And did I mention he was a spy, too? No really, kids, let’s find out more about the Chevalier d’Eon.

First of all, no, this is not actually related to the manga or anime series Le Chavealier D’Eon, which was about a knight in service of King Louis XV looking for clues about the death of his sister. The real Chevalier was a man who spent the first 49 years of his life as a man and the last 33 as a woman. Though the choice may not have been entirely d’Eon’s own personal preference. In 1763, after being appointed to Le Secret du Roi, the secret network of spies who worked for King Louis XV (the same from the anime/manga), he was named Plenipotentiary Minister to London. However, someone was gunning to replace him, and d’Eon ended up demoted to secretary. He then got into a bit of a tussle with his replacement, accusing the man of trying to murder him and then, later, holding on to some private security documents to blackmail the king. By some accounts, he was sent to prison for this and escaped from France to England, where he lived out the rest of his life as a woman, cross-dressing to protect his identity.

But he was so persuasive as a woman (and also flat-out refused to admit his gender when asked) that people took bets on what gender he was, and when he died in 1810, only an autopsy confirmed that he was a man. The people who knew d’Eon for the last three decades of his life had no idea, including his own housekeeper (who went into a “state of shock” following the discovery). Apparently, the French government, knowing that d’Eon had a ton of secret information that could really blow their cover (including plans to invade England), let d’Eon off the hook and allowed him to live out the rest of his life as a different person as a way to thank him for not spilling all their state secrets. They also went ahead and paid all his debts, like he requested, just to ensure their spot would not be blown the heck up.

The painting itself had experts scratching their heads. Originally thought to be of a woman, once restoration began, some distinctly male features started revealing themselves on this handsome woman in the fancy hat. Like stubble, for one thing, and the muscular nature of the facial structure. Art dealer and historian Philip Mould made it his mission to figure out the identity of this portrait’s subject, and when he finally did, he knew this was a special find:

“It’s a combination of mirth and respect for a man who was bold enough, brave enough, but also extrovert enough to state his case.”

To this day, the “Patron Saint of Transvestites” still inspires those who choose to dress in the clothing of the opposite gender; the term “eonism” means the male adoption of female dress. And so goes the story of the former French spy who dressed as a woman before any had ever really heard of such a thing as a lifestyle (outside the theater, anyway).