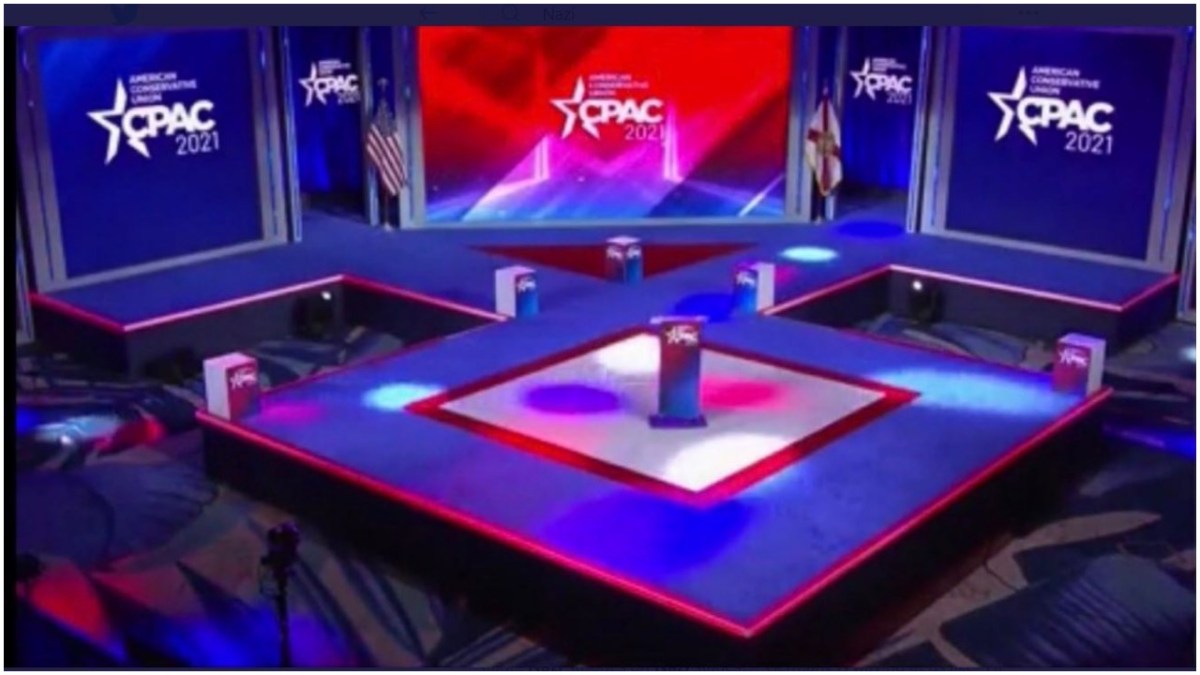 The 2021 Conservative Political Action Conference (CPAC) has made a bold and unequivocal statement about where their loyalties lie: squarely with the hateful rhetoric and policies of former president Donald Trump. This includes CPAC attendees going all in on white supremacy and Nazism, from their talking points, speakers and actions down to the very design of their main stage at the Hyatt Regency in Orlando. Twitter users pointed out the the stage design is a replica of the Odal rune.

The CPAC stage was a Nazi symbol. Disgusting. pic.twitter.com/tv4TUIfIrF

Less known than the swastika, the Odal rune dates back to ancient Germanic languages and symbolizes heritage, inheritance, or inherited estate. As the emblem of ethnic Germans (Volksdeutsche), the Odal rune appeared on the flag of the 7th SS Volunteer Mountain Division Prinz Eugen operating during World War II. The Odal rune was also prominently featured as a badge on SS uniforms, and has been co-opted by neo-Nazi groups, including the National Socialist Movement(NSM), across the globe.

The horrific stage design is less of a dog whistle and more of a primal scream, symbolizing the republican party’s overt support of white supremacy and Nazism. They’re not even trying to hide it anymore. Many took to Twitter to express their outrage at the blatant imagery:

The CPAC stage resembles a known SS Nazi insignia. Generously, let's assume the design was in error. They should immediately release an apology and change up the stage. Not doing so will convey the most reprehensible intent. https://t.co/s5rsGkL7Sy

.@Hyatt, the #CPAC stage is designed to be a rune used by the Nazis. Curious if you are okay with Nazi symbols being used on your properties like this? pic.twitter.com/XoZeV9BiLG

There are coincidences in life. The #CPAC2021 stage is not one. It is a Nazi symbol. pic.twitter.com/voXsBVDbUc

This is such a specific shape that it's hard for me not to think it's intentional…. https://t.co/68mK5Q8Q3V

CPAC accidentally making their stage the shape of a Nazi symbol pic.twitter.com/6b07CAPS13

When pressed for comment, Hyatt released a statement saying, “We take pride in operating a highly inclusive environment and we believe that the facilitation of gatherings is a central element of what we do as a hospitality company. We believe in the right of individuals and organizations to peacefully express their views, independent of the degree to which the perspectives of those hosting meetings and events at our hotels align with ours.”

So Hyatt is basically saying that a giant Nazi symbol on display in their conference room is a gesture of tolerance? That is quite a ghoulish take.

Hyatt seems to acknowledge here that the stage design does replicate a Nazi symbol that is in agreement with CPAC ideas. There is no denial, just a statement that their renters can do what they want. Pathetic. https://t.co/9y1S3o0XPR

Are you okay with Nazi symbols being used on your properties?

Because if you fail to speak out & do something about this immediately, I’ll be sure to no longer patronize any of your properties ever again. #CPAC2021 #CPACstage #CPACNazi pic.twitter.com/beFauYAMwO

The Republican party’s affinity for white supremacy is, of course, not a shock. After all, they supported Trump’s big lie and a white nationalist insurrection on the Capitol, which resulted in 6 deaths. They also refused to hold Trump accountable by impeaching him in the Senate in a tacit endorsement of his violence. Congressman and alleged insurrection supporter Paul Gosar (R-AZ), even spoke at a white nationalist conference in Orlando, Florida on Friday night, where he was the keynote speaker at white nationalist Nicholas Fuentes’ “America First Political Action Conference” (AFPAC), before speaking at CPAC the following morning.

There is no more clear and present danger to our democracy than the republican’s embrace of fascism and white supremacy. And democrats are expected to reach across the aisle and compromise with these monsters? I don’t think so. Vote them all out and hold them accountable for their blatant Nazism.