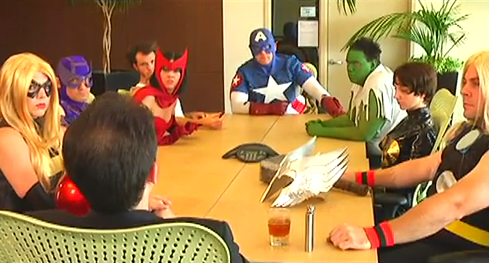 A group of comics fans going under the YouTube username of AvengersWeb have put together a series of videos (so far three) where the Avengers themselves sort through the thorniest issues of the day.  First on the docket?  Health Care Reform.

Not exactly an easy thing to work through when your empoloyees are citizens, non-citizens, and gods; some of them not only qualify for Medicare but were around when it was created; and pre-existing conditions include things like gamma radiation, alcoholism, and cryogenic freezing.

At least, somewhere, Spider-Man is excited about student loan reform, and Wolverine, as always, gets the best punchline.  Watch it below.