Teen Wolf Recap: The Fox and the Wolf | The Mary Sue

Teen Wolf Recap: The Fox and the Wolf

Oh yay. Teen Wolf does another flashback episode. It’s tough to communicate the full extent of my excitement using this medium, so here’s a gif.

Also: The twelve billionth instance on this show of the bad guy also being the love interest (past or present, legit or under false pretenses) of one of the good guys. Also^2: Middle aged lady werewolf.

I repeat: MIDDLE AGED LADY WEREWOLF. Can she get her own show? Can we ditch the twins for her?

But I’m getting ahead of myself (MIDDLE AGED LADY WEREWOLF). The episode starts in 1943, at the Oak Creek Japanese internment camp. You know, the one Papa Yukimura told Allison didn’t exist (because her family’s full of hunters and he doesn’t trust them. COMMUNICATE, PEOPLE). In the flashback we see two soldiers dumping corpses into a ditch, when BAM! Nogitsune! It kills them both, one via shooting and the other by asking the riddle “What has a neck, but no head?” then ripping his head off his shoulders.

A gruesome sense of humor. I like that in a demon.

Turns out the superveryimportant item Stiles and Malia found in the basement of Eichen House was a picture of Mama Yukimura at the internment camp. Because, as we find out later, she’s 900 years old. 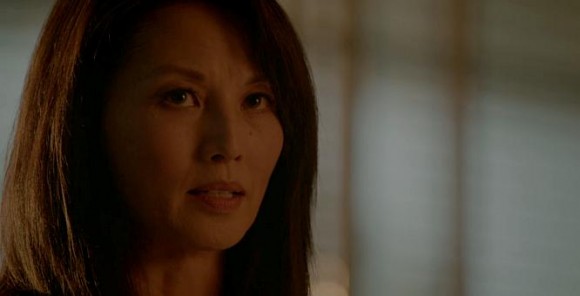 When 900 years old you reach, look as good you will not, hmm?

Also uncovered: A shattered katana. So did Malia just go to Scott and hand him those items? Because the implication to me at the end of Echo House was definitely that she intended to cause him some damage. What with the smirk and the I’m-not-innocent blue eyes and all. But no, she probably just politely asked him to turn her back into a coyote as soon as all the Japanese mythology stuff blows over. Setting up drama and not delivering on it: It’s the Teen Wolf promise.

Scott and Kira dash to the school to be with Kira’s parents, and Kira tells her mom that she is straight up not budging from this very spot until she tells them where the Nogitsune comes from. Mama Yukimura’s response: “It’s it obvious yet?”

“The Nogitsune came from me.”

Yeah, that wasn’t obvious. At all.

From there we jump full swing into flashback land, except Mama Yukimura seems awful focused on talking about Reese, her cute medic boyfriend. Scott, emboldened by Kira’s badassitude (it’s like a feedback loop of awesome), calls Mama Yukimura on the fact that she’s totally trying to stall until the sun goes down and the final Oni attacks the NogitStiles. Scott and Kira may be kind and noble and giant puppies, but they’re not stupid. (Except that time Scott let Deucalion go with only a pinky swear not to keep killing people. But he can’t be blamed for the brain farts of the writers.)

Mama Yukimura, who doesn’t trust werewolves and isn’t here to be bossed around by a teenage whippersnapper, tells Scott that once she tells him the rest of her story he’ll be totally onboard with having the Oni kill the NogitStiles. Ma’am, no offense, I like you, but you don’t know Scott very well.

Back at the station Papa Stilinski’s gotten Derek and Chris Argent released so that they, along with Allison, can help him trap Stiles. See, the Sheriff figured out that Stiles doesn’t really have the disease that killed his mom—it was all a trick to sap Stiles’ will to fight. At first it warmed me heart and soul that Papa Stilinski managed to figure out (one of) the Nogitsune’s trick(s), easy peasy, but then I remembered the scuttlebutt that someone’s supposed to die this season, and I really don’t want to jinx him. The NogitStiles could’ve been depending on the Sheriff figuring it out. Granted, the last time Jeff Davis & co absolutely promised that a major character was going to die, Jackson bit the dust for all of 30 seconds. (The deaths of neither Boyd nor Erica, if I recall correctly, were teased.)

Sheriff Stilinski might not be afraid to die, but I’m damn well afraid for him.

Later on the Sheriff and Allison have a moment in the elevator, where Sheriff is all impressed by Allison’s everythingness (as one is), and Allison breaks down and admits she’s terrified and has no clue what she’s supposed to be doing. The Sheriff hugs her and says she sounds like a cop, and I know this fandom is all into future fics where Stiles goes into his dad’s line of work, but seriously: Law enforcement Allison. Give it.

Then we get some lovely product placement 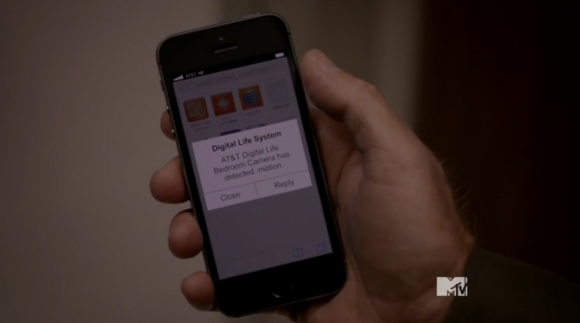 …which tells us that the NogitStiles has popped in for a quick game of chess in Stiles’ room. What he’s done is use the Chess Board of Supernatural Metaphor to tell the Sheriff, Derek, Allison, and Chris Argent that the next stage of their merry adventure will take place at Derek’s loft. Chris (who’s not 100% on the let’s-not-kill-Stiles side of things) insists that the Nogitsune is luring them into a trap, but the Sheriff thinks Stiles managed to break through his possession and leave a message himself. He logics the situation and come to the conclusion that the Nogitsune, as a trickster, doesn’t actually want to kill people. “It wants irony, a trick, a joke,” he explains. “All we need to do is come up with a new punchline.” He has a plan. SHERIFF, DON’T DIE.

Meanwhile, more flashbacks! Young Mama Yukimura, whose 1943 incarnation I’ll refer to as Noshiko, is being all cute with her secret boyfriend when she sees the camp’s doctor and some of its guards making an underhand deal. Turns out they’re selling the camp’s supply of meds on the black market, which really sucks when a pneumonia epidemic breaks out. The internees, needless to say, are not pleased. There’s a riot, and Reese tries to get the guards not to shoot the internees, so one of them hits the aforementioned MIDDLE AGED LADY WEREWOLF with his gun instead. That’s the first time we find out she’s a werewolf, by the by. Before she was just a cranky old lady who preached following the rules and played board games as a method of not losing her sh*t and ripping some peoples’ heads off.

This is most likely the only episode we’ll see her in. I am sad.

The riot gets even worse, and the werewolf lady molotov cocktails Reese. Teen Wolf, I know I snark about your product placement, but I do so affectionately, I swear. You can introduce a character who’s an honest-to-god talking Reese’s Cup if it’ll get you a better budget for CGI fire: 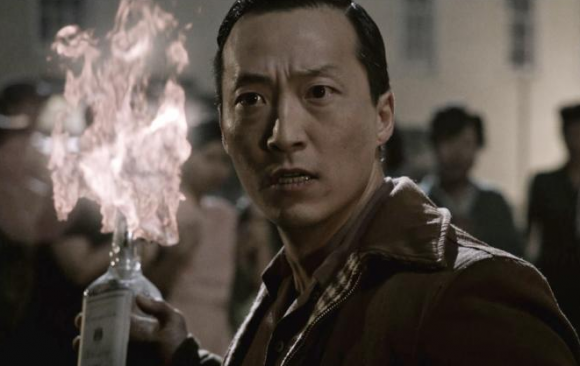 Noshiko gets shot, and she has enough Kistune power to begin healing herself, but her heartbeat’s so slow that the guards assume she’s dead and cart her, the dead internees, and Reese off to get buried in a shallow grave. There’s a cheesy soft-lit flashback… 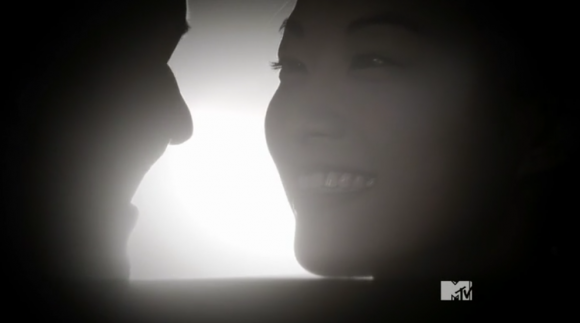 You can tell it’s super-romantic because it’s sepia.

…and Noshiko, consumed by the fact that she might die without making the camp administration, corrupt guards, and doctor pay for what they did, calls upon her ancestors to let a Nogitsune possess her. Only the Nogitsune, having a sense of humor, possesses the burned-‘n’-bandaged corpse of Reese instead. There’s the Nogitsune we know and love! He kills the guards, as we saw in the first scene, and goes off to sow more chaos and confusion.

(How much do I wish actual Japanese people were involved in the writing of this series about Japanese heritage and mythology? Very much.)

On one hand, Noshiko, you’re over 800 years old, you know what the Nogitsune is, it was freaking stupid summoning one of them like that. On the other hand: She’s lived with her people as they suffered a grave injustice. A lot of them got murdered. And the party responsible is on the verge of getting away with it. Plus a guy she loves just died. She‘s about to die. She’s pissed, and she wants to wreck sh*t. So yes, summoning the Nogitsune wasn’t the most rational decision she could have made, but screw it, I love her.

Noshiko retrieves her fancy Kitsune sword and runs after the Nogitsune, and with the help of the werewolf lady (little weird that Mama Yukimura’s so unwilling to accept werewolf assistance in the present day, huh?) she’s able to exorcise the demon from Reese’s corpse. The sword shatters. Back in the present day Kira uses her Thunder Kitsune powers to mend it.

The sword is now Kira’s, and Mama Yukimura’s all ready for her daughter to go off and skewer some Nogitsune. Scott, coming out of his fog of lust at seeing Kira do something amazing, 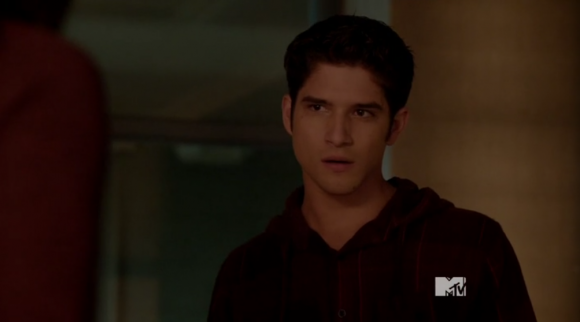 notes that waitaminute, Mama Yukimura, you didn’t actually tell us anything about how to get the Nogitsune out of Stiles. She responds that the only way is to kill Stiles. (But… Reese’s corpse was already dead. So how did that work? Does Kira need to kill Stiles with the magical sword, or does she just need to stab him? Can she nick him on the toe? A gash on the arm? Is it technically possible, if you get to a hospital soon enough and have modern, not 1940s, medical technology at your disposal, to survive a stab wound through the stomach, which is where Noshiko stabbed the NogitReese? I know from Reservoir Dogs that it takes a long time to die from being shot there. All I ask is some mythological explanation and consistency!)

Scott and Kira jet to meet Allison and the rest at Derek’s loft, where Stiles is there waiting for his dad. Before the pair leave Mama Yukimura gives Kira the sword’s scabbard, because any daughter of hers is going to use proper safety measures when it comes to carrying around sharp objects.

Back in flashback land we see Noshiko bury the fly that came out of the NogitReese’s corpse under the Nemeton. That’s why it came back after season 3A’s magical sacrifice ritual.

I’m sorry, but we’ve seen over the past few seasons that characters in the Teen Wolf universe have at least some options when it comes to researching supernatural phenomena. In the 70+ years since Noshiko buried the fly could she not have, I don’t know, gotten in touch with some emissaries or Japanese mythology experts (that knowledge has to be out there, or else who wrote the scroll?) and asked “Hey, any idea how I can kill this seemingly immortal fly that, if released, will unleash a horrible demon upon the world? I buried it under a magical tree, which I think should trap the demon… unless it’s more likely to release it. Didn’t check. Also, the demon fly’s in a very normal, very breakable mason jar and not, say, a mason jar inside a lockbox inside another lockbox inside an airtight container, all encased in concrete. Because the jar was easier, and it’s not like I had multiple decades to figure out how to kill or more permanently trap this thing. What could happen?”

Sigh. I would enjoy this show much more if I could somehow stop myself from putting more thought into it than the writers do.