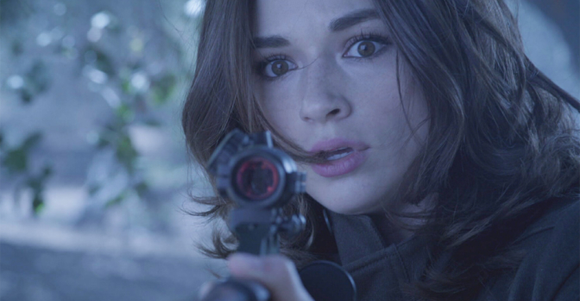 Teen Wolf‘s 3b is in full swing, guys. And sure, we’ve seen episodes where bigger things happened — lizard people revelations and murders and such — but this episode had some truly suspenseful stuff, mixed in with some cute, and Scott Being Great, and more people finding their anchors within themselves. Basically, it was Teen Wolf in a stride, if a deceptively simple one. Then again, I may just be saying that because new student Kira is the most adorable person to ever exist. As I’m taking over Rebecca’s Teen Wolf recapping duties for this week, let’s get to it, shall we?

Let’s start with the more annoying aspects and then move to the rest, k? We begin this episode where we ended the last, with Derek and Peter being tortured shirtlessly. This would be fine as a dramatic device under two circumstances: 1) if we had not seen this with Derek probably literally fifty times at this point, and 2) if the reason we keep seeing Derek shirtless and tortured were not rooted in the show’s producers and crew seeming to think that their audience finds the continued physical and psychological torture of one character arousing because of his physique. Alas.

The perpetrator is a Hispanic gentleman who will probably die because he’s a not-white villain and only the white male villains get to live on this show. Apparently their boss (mother?) is this badass hispanic woman who is looking for “The She-Wolf” and seems dastardly in a way that’s way more interesting than Deucalion ever was. It’s nice to see another hunting family, especially one that is actually being run by a (living) woman. This woman’s also pretty ruthless, à la Mama Argent before The Incident: She cuts off Peter’s finger. I’d be mad but I need some of the male villains in this show to get some kind of comeuppance, even if in real life I’m a pacifist.

Stiles finds Scott in the woods and they go in search of whatever the hell it is they’re looking for. They find a coyote den — nay, a werecoyote, because Teen Wolf. Papa Stilinski finds them in the woods and they tell him what’s up, but he continues to be confused: “Well that makes sense — IN A CHINESE FOLK TALE,” he says. You really gotta get a hold of what genre you’re living in, Sheriff.

At school afterwards we learn once again that Kira is the most adorable human on the planet, and that she and Scott interacting is basically just two brands of OVERWHELMING GENUINE PLEASANTNESS bumping up against each other and I LIKE IT. She gives Scott some more information on the Bardo, which she meticulously printed out for him.

“You didn’t have to do that!” he says. “It only took a couple hours,” she replies, and I’m pretty sure cartoon hearts spat out of my eyes in that moment. Then her dad shows up and literally says “Here, you forgot all the research you did for that boy you like,” and the humiliation just makes it even more cute.

Kira then finds herself alone in a Beacon Hills High hallway, and you know what that means: Supernatural attack! They really should set up a mandatory buddy system. This time the attack comes from that pesky werecoyote that’s been wandering around and may or may not be (spoiler alert: definitely is) a young girl.

Scott’s got this kind-of-supernatural kind-of-just-good-guy instinct that tells him when people are in trouble, though, so he helps Kira out pretty immediately. The police, however, do wind up there, and god they must have very hectic schedules in Beacon Hills. Stiles is trying to convince Papa Stilinski that “putting down” a werecoyote is also putting down the girl living inside said werecoyote. They talk about Papa Stilinski’s slow learning curve to the whole supernatural thang but it quickly turns into another Everyone Loves Scott moment, which I approve of because I am definitely a member of that club and would even run for treasurer if they’d let me because I feel like our Scott altar could use some work.

Stiles, of course, is the president of the Everyone Loves Scott club, and says essentially as much when his dad asks him if he’s 100% sure that the werecoyote is a girl and not an animal, to which he responds: “Yes. Because Scott’s sure.” And then I cried because the world is magic. It’s especially magic because Scott’s of course right there, because of that aforementioned ability to gravitate towards whoever is loving him the most hardcore at that moment. Right now that seems pretty well tied between Stiles and Kira (Kira’s got a faaaast learning curve when it comes to loving Scott), with Isaac brooding in a corner.

Back to Peter and Derek and Peter’s severed finger. There are also gunshots and just general mayhem! Damn, guys, get your sh** together. BUT WAIT: That awesome lady Deucalion “killed” in the season three premiere is back! The one who was hired to save Isaac! And she’s kicking ass and saving Derek and Peter. Can I marry her? I kind of want to marry her. And this show un-killed one of their women of color! Hooray! Now just kill Gerard and maybe we’ll start down a path to being even, because there’s no good reason for him to still be alive.

Unfortunately, it seems like she’s working for Deucalion, which is sketchy ’cause…like…well..he murdered her? But as she said, “girl’s gotta eat,” which seems akin to “girl’s gotta plot device,” and I’m just glad that she’s back even if I’m side-eyeing who the writers chose to employ her.

Another meanwhile/elsewhere: Allison’s being badass with a giant weapon, which they’re planning to use to handle the werecoyote situation. Scott’s like “Allison’s a perfect shot, it’ll be fine!” whereas Isaac and his preternaturally balanced scarf are like “She USED to be a perfect shot before y’all DARKENED YOUR HEARTS WITH SUPERNATURAL FORCES and went CRAZY.” Which is kind of legit, let’s be real: They’re struggling.

Isaac does ask the valid questions, though: How does one go about turning a coyote into a girl when the girl part hasn’t been out and about in eight years? The answer? Scott! Scott can do it because Scott has the power of rainbows and kindness and nobility. Probably also unicorns, because they’re just so nice and he’s just so nice.

He can also do it because he’s remembering that time Peter trapped them in the school (reminder: Peter’s got megalomaniacal issues they should probably deal with at some point) and made Scott turn with just his voice. Deucalion did that same thing in the distillery that one time. And now Scott’s an alpha, too! Unfortunately for Scott, his relationship to his were-side is now an extended metaphor for penis performance issues, so they’ve gotta find an un-impotent alpha (or someone with alpha knowledge) to help ’em out.

Enter the twins, who do some acrobatics while beating up Scott. For science, apparently! And/or teaching! Apparently Scott’s gotta get tough — like West Side Story tough, I’m assuming, hence the acrobatics — and then roar. They keep saying things like “full throttle” and “giving in to the beast” and it’s all very ’80s training montage and everyone is very sad to watch Scott struggling. He’s afraid if he turns he won’t be able to turn back. But then the twins are like “if you can’t turn back you’ll turn into Peter” and Scott’s all “HELL NO,” and that’s how teaching works.

Allison, meanwhile, is still elsewhere struggling with her own darkened-heart repercussions, this time via a hallucination that she’s awake on an operating table while her good ol’ Aunt Kate removes some vital organs (namely, that aforementioned blackened heart). Then Kate and the other “doctors” turn into vampires (I think this is the first we’ve seen of vampires on this show?) and go at her. When she wakes up she’s pointing a gun at Isaac. “How am I supposed to help anyone when I’m like this?” she asks, “what am I supposed to do?” It’s a good question, and one that multiple of our heroes are dealing with as we continue season 3b. Apparently it’s kinda hard to keep a guy from killing a coyote who is actually his daughter when you are hallucinating dead relatives and/or struggling not to let yourself turn permanently-were. Still, it’s nice after 3a to have a segment based off of emotional consequence and not one revolving around slow-mo action sequences.

Alas, this is a TV show, and so they must press on despite their various Issues. Of course, it’s all a bit hard to keep track of because it’s kind of all of them running through the woods in different directions, etc., and then Isaac gets caught in one of the traps Malia’s grieving father set up. Allison finds him and gets her shooting mojo back — with the help of the new Argent family motto; it’s kind of great she found her anchor within her mission to help people who cannot help themselves — in time to shoot the dad with a tranq gun before he can accidentally murder his coyote-daughter. In all the woods-running chaos Lydia finds herself with her foot in a trap that’s just angsting to crunch her leg, but Stiles can’t exactly follow the instructions to help get her out of it because he can’t read. It’s all very inconvenient. Lydia’s really great at Stiles pep talks, though, so she calls him smart and points out that he’s always the one who figures things out, and so, well, he figures it out.

Scott, of course, figures out his alpha power and roars Malia back into human form — she’s a pretty sixteen year old now instead of the eight year old she was when she first turned, so you kinda gotta wonder how weird/scarring it must be to have gone through puberty as a coyote and then wake up with human boobs and stuff. Kinda something we should think about should anyone on this show try to date her (I’m looking at you, Stiles).

Papa Stilinski returns Malia to her father, and it’s a genuinely sweet reunion scene that is punctuated by Stiles regaining his ability to read. Then the episode ends with a mysterious werewolf-proof trunk that contains another mysterious container. We also see a bunch of fireflies turn into people, which is….ominous, I’d say. Yeah. Definitely ominous.

What did you guys think of this episode? Will the show continue not addressing that they re-set up Peter to be this season’s Big Bad? Or will we focus on the Bug Bad that are the firefly people? I apologize for that truly terrible wordplay. But I still want to hear your opinions.