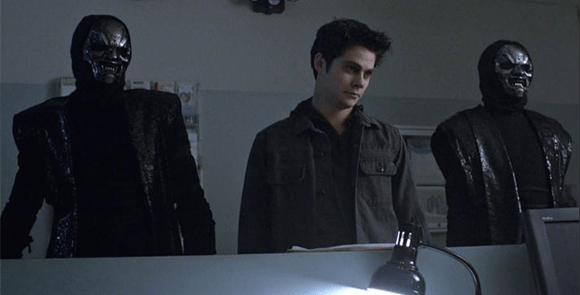 Last night, 9:59 PM EST: “Man, it feels god that I’ve decided to give up on Teen Wolf after season three. Time to start the last episode I’m ever going to watch!”

We start with Scott, Lydia, and Isaac in the sheriff station post-Allison’s death. Chris has instructed them on what to say, so they don’t tell Deputy Parrish “A demon ninja did it!” There’s an emotional moment between Chris and Isaac where Chris explains that, as a hunter, he’s able to compartmentalize his emotions, which is why he’s been able to keep it together in the immediate aftermath of his daughter’s death. Isaac points out that, hey, he doesn’t have that particular skill set, so hug the cute baby werewolf now, please?

Isaac as Chris Argent’s protege: I want it. Hunter werewolf.

Meanwhile Kira, Kira’s parents, and Stiles are chatting about how to take down the Nogitsune. Or, rather, Stiles and Kira’s parents are talking about how awful everything is until Kira drags them back on-track and asks Heyyyyy, what’s our move? Mama Yukimura helpfully offers up the information that it was the power of the Nemeton that trapped the Nogitsune before. Scott and Lydia, over at the animal clinic, find out that Deaton made the box Talia Hale’s claws were stored in out of Nemeton wood, and it might be able to contain the Nogitstune Demon Fly.

THIS. IS. WHY. YOU. COMMUNICATE.

“Man, the Nogistune’s really messing some things up! If only I could trap it like I did before, but the Nemeton’s been cut down!”

“Wait. I know a guy who knows about Nemeton-type stuff. I’ll call him and ask if he knows anything!”

“I made a hope chest out of Nemeton wood once. You think it might help?”

The Nogitstiles and some Oni show up at the hospital, where they proceed to wreak holy hell. They manage to stab Melissa, who’s there trying to convince Agent McCall not to be a total bozo and nope out to San Fran because Scott’s mad at him about being an absent father. Seriously, you dope, are you trying to be stupid? Oni also attack the sheriff’s station, where they manage to wound Sheriff Stilinski and Deputy Parrish before disappearing in a puff of smoke. Ditto Deaton at the animal clinic. They’ve all been given Poisonous Smoking Oni Wounds, and it looks like they might die soon.

Also, anybody wanna take bets as to whether Teen Wolf‘s going to address the fact that Stiles should be in major trouble after the Nogitstiles attacked the hospital? Even if he killed all the witnesses, there are still surveillance cameras.

And I have a new favorite character: 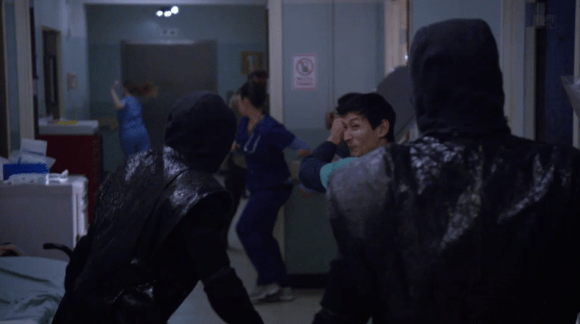 He hits the demon ninjas. WITH. A. TRAY. We never actually saw the extent of his Oni injury. Maybe he’s not dead. Come back to me, Tray Guy!

It looks at this point like the Nogitsune is definitely going to win, so the twins are all ready to skip town. Aiden wants to convince Lydia to go with him, but Derek says there’s no way she’ll ever run and hide. She’ll stay to help Scott, because he’s a perfect leader and sun shines out of his ass, and everyone will do everything to help him always because he’s so wonderful and selfless and amazing.

Stiles, better watch it. Someone’s moving in on your position as President of the Scott McCall Fan Club.

Back at the Argent apartment Isaac realizes that Allison figured out silver arrowheads will kill the Oni. Silver bullets, like what mini-Chris Argent used in his flashback scene, won’t work because they leave the body too quickly. But arrowheads, which Allison just so happens to have made spares of, poison the Oni quite effectively.

Props to Isaac for unlocking the mystery of Big Bad Hunter Chris Argent’s flashback for him.

And major props to Allison for saving her friends’ lives even after she’s dead.

Lydia, Stiles, Scott, and Kira show up at the high school, where Derek and the twins are supposed to meet them to hand off the Nemeton box. Stiles makes Scott promise that he’ll go through with the plan even if it means Stiles is going to die. Scott responds that the plan is to save Stiles, not kill him, so he will go through with the plan, thank you very much. Then the four of them find themselves transported to a Japanese winter wonderland, aka Bardo (remember Bardo?), where Oni and the Nogitstune—the creepy bandaged one, not the Nogitstiles—pop in to mess them up. Kira immediately gets sword-y with them, and… look, I love me some violent lady characters. But. It makes me sad, and a little uncomfortable, the way Kira is immediately being set up as “the new Allison.” Give it a little time. I’m still mourning.

Back at the hospital a poisoned Mama McCall is trying to explain to Agent McCall that if she dies, he’ll have to stick around and make it work with Scott. Agent McCall gives her pushback, whining that but he told her to leeeeeave, waaaaaaahhhh. Even when Mama McCall is literally on her deathbed he still has to be an argumentative little asshole with a martyr complex.

Outside the school Derek and the twins are getting their asses kicked by the Oni, but things turn around when Isaac and Chris show up with Allison’s silver arrowheads. Still, one of the Oni manages to stab Aiden in the stomach.

The Nogitsune goes all Bond villain and finally reveals his evil plan: Mama McCall, Sheriff Stilinski, Deaton, and Deputy Parrish will all die unless Scott kills Stiles. Stiles is totally fine with it… but Scott, not so much. Stiles is all ready to stab himself in the stomach until he realizes that all the Oni and the Nogitsune are an illusion. So he, Scott, Lydia, and Kira just walk through the gauntlet of stabbiness out into the school proper. Everything’s great until the Nogitstiles shows up and punches Scott and Kira out. Except BAM—it’s not so easy to knock a werewolf unconscious! Scott bites the Nogitstiles, thus changing the body of its host (but… but it’s not in Stiles’ actual body anymore…? Ah, screw it), which is what defeats it. The Demon Fly vacates the Nogitstiles’ body, which promptly dissolves into ash in a rather cool li’l special effect. Isaac traps the fly in the Nemeton box. The magical poison leaves Mama McCall, Sheriff Stilinski, Deputy Parrish, and Deaton. Everything’s fine!

We see Mama and Papa Yukimura putting away their Go board in the aftermath of the Nogitstune’s defeat, and waaaait. Were they just sitting at home while a group of teenagers, including their daughter, marched into mortal peril? “The Nogitsune being here is my fault! It’s my responsibility to kill it!… Ooh, America’s Next Top Model is on.” I don’t give a dingle diddy damn if Mama Kira’s lost some of her mojo now that the Oni have gone to Team NogitStiles. Lydia doesn’t have fighting chops either, and she’s still there with her friends! But Kira’s parents don’t help in the final battle—the battle in which their only child could be killed—at all.

This show makes no damn sense.

Mama McCall hugs a crying Scott, and Chris and Isaac take the Nemeton box with the demon fly away to hopefully store it somewhere a bit more secure this time. At least duct tape the lid closed. We see that Malia’s enrolled at Beacon Hills High School, and then there’s a quick scene of Scott teaching her how to pop her claws. She and Lydia smile at each other, like they might be new BFFS. Allison’s being replaced left and right. I’m not ready.

(Also, did we forget about how there were several hints of something not-quite-normal with Malia? Her eyes glowing blue and her evil Scott-related grin in Eichen House? Her name waking Stiles up in De-Void? Bueller? Bueller? I wish I could believe that the show will actually follow through on that, instead of it being another case of manufactured drama that Jeff Davis probably has no intention of delivering on.)

Jeff, you know that now that Danny’s in on Beacon Hills’ supernatural shenanigans, you have no reason not to give him a bigger role in season four, right? There are no excuses now, not even bad ones. FYI. You know what to do.

But wait! The freakoutage is not yet over!

Derek chats with Stiles in the BHHS locker room (and Sterek fans lose their collective wits) about how he had a dream that a hunter family, led by a dude named Severo, came to his loft looking for “the she-wolf,” who it turns out is not Cora.

Teen Wolf, don’t think I didn’t notice that you changed a matriarchal hunting family so they’re led by a dude now.

The she-wolf lets fly a smoke bomb, takes the hunters down, and shoots Derek in the stomach. Back in the locker room Derek confides that he doesn’t know if he’s still dreaming… which, it turns out, he is. (Of Stiles. Just FYI.) 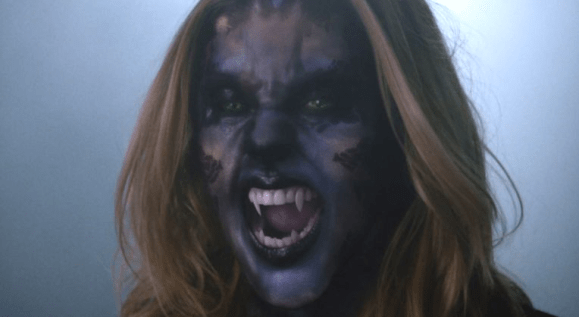 BACK FROM THE DEAD AND READY TO WRECK SHIT. GASSSSSSSSSSSP.

Remember that time in season one when Peter speared her in the neck with his claws? Turns out Mr. Drama accidentally turned her instead of killing her. Whoops. And now she’s back with freaky green eyes, hunter know-how, werewolf superpowers, and (presumably) a hankering for vengeance.

Au revoir to another season of Teen Wolf. It was better than 3A. Not as good as one or two. I’m haven’t decided whether I’m giving season four a shot. I really liked this episode and some of the things it looks to be setting up, but Teen Wolf has always given good finale. It’s the storytelling follow-through that’s not so great.

One last question before we say au revoir (for now, maybe) to the werewolves, humans, and assorted supernatural creatures (what are you, Parrish?!) of Beacon Hills: Who do you want to kill Peter? Kate, or Lydia?