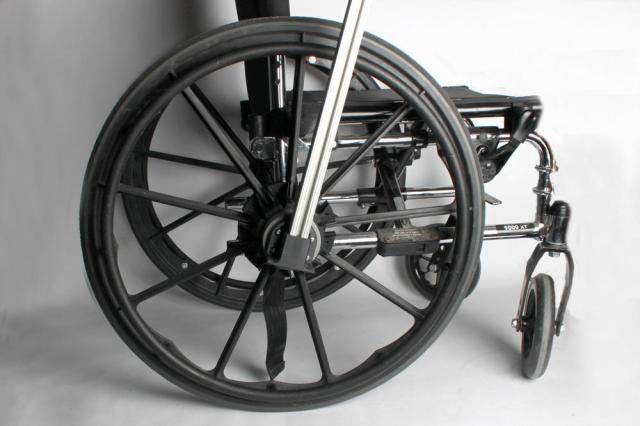 Sixteen-year-old Mohammad Sayed, a student at Cambridge’s experimental high school NuVu, initially wanted to “make a wheelchair that flies and go under water” for a class project. “But [my teacher] said we need to start small and then go big.”

Instead, Sayed and a team of NuVu students used a 3D printer to add a canopy and laptop, and rebuilt the chair itself so that Sayed can alternate between a pushing and rowing motion to avoid repetitive stress injuries. (Wired points out that Sayed isn’t the first person to design a rowing wheelchair; NASA engineer Salim Nasser’s Rowheel Project is based on similar principles.) The teens say each part only cost $2-$3 to print, and the modified design’s non-printable bar can be purchased at a hardware store. Sayed explains,

[…] if you are someone with atrophy and the muscles you would use to push with your biceps are getting weaker, allowing for different types of movement could mean the difference between continuing in a manual wheelchair or being forced to convert to a power wheelchair.

16-year-old Kate Reed assisted Sayed on the project, and says redesigning the chair forced her to think outside of her comfort zone:

Although the team’s success demonstrates the life-changing potential of having access to a 3-D printer, Sayed says that building a smarter wheelchair also taught the students how to coordinate on designs:

Before NuVu, I didn’t do well in groups, because as a creative person you always push your own ideas […] Communication was sometimes a challenge, but now I’ve learned.

If you’re in need of some inspiration, head over to NuVu’s website and check out more innovative creations. The students have produced a bracelet designed to stimulate pressure points that alleviate anxiety, a public sock drier intended to help the homeless, and an Exo-Lung Peacock dress that was displayed on the runway during 2014’s Boston Fashion Week. Considering all the incredible work NuVu teams have done so far, Sayed’s flying, water-capable wheelchair can’t be far off.