This TARDIS Replica Is a Fold-Down Bed | The Mary Sue

This Is Not Just a TARDIS Replica, It’s Also a Fold-Down Bed 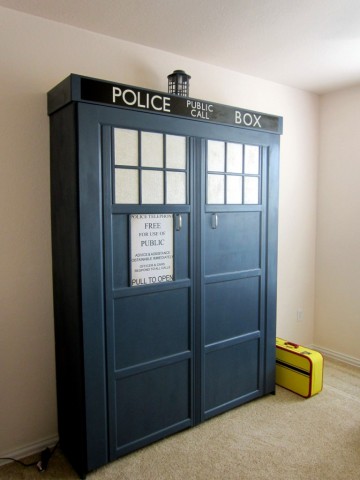 If you have as much creativity and ingenuity as this awesome DIYer, you too can literally make your guest room bigger on the inside by following her steps to build your very own TARDIS-themed Murphy Bed.

Longtime blogger and nerd enthusiast “Stubbs” wanted to be able to use her home’s second bedroom for hobbies and working without sacrificing its usefulness for overnight guests, so she decided to get a pull-down ‘Murphy bed’ for the space. But, she says, the ones that she found pre-made were too expensive, so she decided to build her own.”Since Murphy beds are the ultimate space maximizers,” she writes, “it only made sense to build it using Time Lord technology: bigger on the inside!”

Speaking of those insides, here’s what they look like: 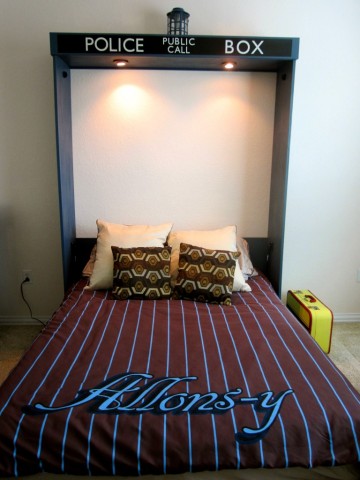 Are those 10th doctor-era TARDIS-interior inspired pillows? Gosh, am I smitten. She also writes:

My design differs from the actual TARDIS (I know), but I wanted it to look a little more decorative while still keeping with the spirit of the TARDIS.  I also wasn’t working with the same dimensions as the actual TARDIS, so I had to make width and height adjustments however I could without taking away from the look.  I happen to like the way it ultimately turned out, so haters can hate somewhere else.

You can check out her full process (as well as pictures of her adorable puppies) at her blog, The Stubby Thumb. Just be careful, it involves a lot of working with wood, and your sonic screwdriver probably won’t be able to handle that.

(via The Stubby Thumb)