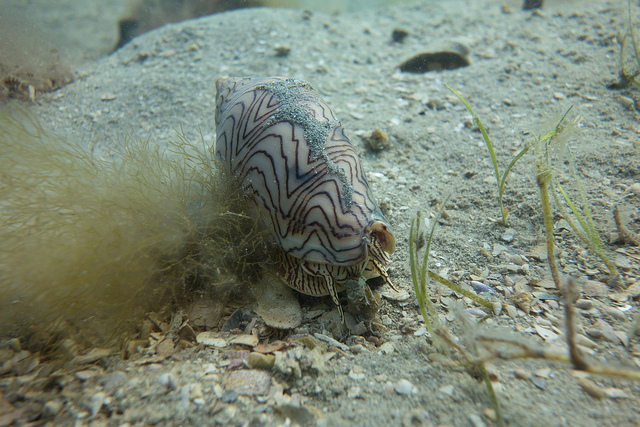 Look at this little guy! Look how sweet he is! So sweet he can kill you with his sweetness. He’s like the deadly version of Hello Kitty, and he would make an amazing villain in an animated Finding Nemo sequel. Let’s make it happen.

Seriously, though, these snails use insulin, among other neurotoxins, in order to debilitate and ingest their prey (including fish! Whole fish!). According to the Proceedings of the National Academy of Sciences, the cone snail produces not only their own snail insulin, but also fish insulin; when a fishy foe approaches, the snail floods the surrounding waters with this insulin, sending the fish into hypoglycemic shock. With crazy low blood sugar, the fish get less glucose to their brain, become lethargic, and the not-so-speedy snails swoop in (well, you know) and swallow their prey.

Helena Safavi, a University of Utah researcher and co-author of the study, says that while they “already knew that these animals make hundreds of neurotoxins in their venom and compounds that cause tissue degradation and affect cardiovascular function,” they were unaware that the snail also caused “disruption of the prey’s energy metabolism.” Bad ass.

In this video, you can see a hypoglycemic fish just hanging out, unable to move as the cone snail wraps its horrifying mouth around it and injects it with neurotoxins to keep it helpless.

Can’t you see the cone snail dressed up all kawaii in an animated film before bam. Hypoglycemic shock? “Do you have a sweet tooth?” That can be the tag line. Thank me later, Hollywood.