In a weird but awesome move, Sweden has started a campaign where its official Twitter account, @sweden, will be taken over and operated by a different Swede every week. The project is called “Curators of Sweden” and operates under the idea that “No one owns the brand of Sweden more than its people. With this initiative we let them show their Sweden to the world,” as said by Thomas Brühl, the CEO of the national tourism agency VisitSweden. That’s a nice sentiment, right? But surely they must assert some level of control over each operator. In short, no. In long, nooooooooo. And it’s glorious.

From a quick look at the feed, you can see that the operators pretty much given free reign to say what they like. Profanity isn’t forbidden, and neither is lambasting tourist traps. 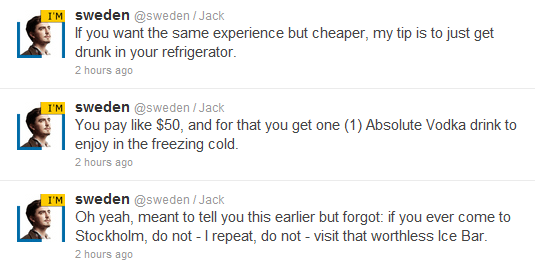 The current operator is Jack, a writer and marketer based in Stockholm, and those in line after him promise some variety. You can look forward to a priest, a lesbian trucker, and presumably everything in between. Being from the U.S., it’s hard to imagine that this could have any positive effect at all, but it seems to be doing quite well. The idea behind the campaign is to try and stir up some interest and curiosity about Sweden, and I think it’ll do a good job. Of course, not everyone thinks it’s a great idea, but I definitely just got 100% more interested in Sweden.