Attention, Readers of Superman: He is Now Spider-Man 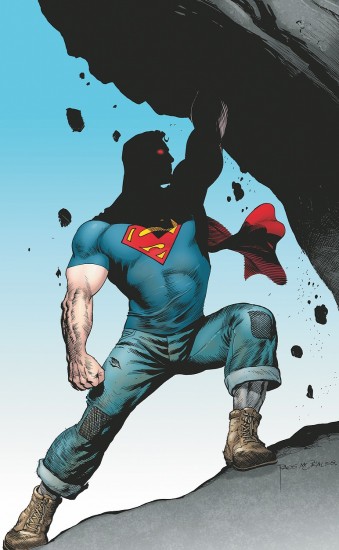 Welcome: welcome to a timeline where Ma and Pa Kent are dead, Lois isn’t into that nerdy Clark Kent, and Superman made his costume from items on hand? What is this, an Elseworld story?

Nope, it’s Action Comics #1 and the new canon of the DCnU, beginning in September.

Folks certainly wondered what was up with Superman’s patched jeans, tight t-shirt and downright adorable tiny cape when the cover of the DCnU’s Action comics was released, but, as it turns out, this isn’t the actual cover. This is: 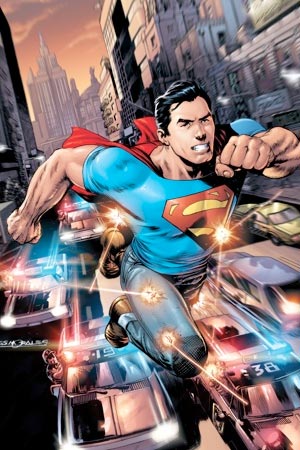 The absolute last word in questionable continuity changes, Grant Morrison, is in charge of Action Comics in the relaunch, one of only two titles which are not set in the current continuity of the DC Universe, where all the superheroes we know and love are experienced crime fighters. To quote myself from a month ago:

Speaking of which, Harras and Berganza also laid out some interesting news about timelines. The Superman of DCnU is canonically the very first superhero, so it’s unclear where DC’s Golden Age characters fit in, and the editors remained mum. September’s Action Comics and Justice League are supposedly stories from the dawn of DC’s Superheroic Age, but they’re also supposed to be only 5 years behind continuity. All other titles that aren’t period pieces are in that contemporary five-year-later period.

DC revealed today what plans for the comic are: Ma and Pa Kent are both dead in this continuity (no word on how old Clark was when they died), Action Comics will have a “younger, more brooding” Man of Steel, who “can leap tall buildings but can’t fly in space,” while Superman will keep up with the grown hero who will no longer be married to Lois Lane. In fact, Lois has a different boyfriend and a “new status quo at the Daily Planet,” whatever that means. That costume revamp? It’s ceremonial Kryptonian armor. Newsarama’s sources say he’ll be “more Kal-El from the planet Krypton than Clark Kent from Kansas,” while Grant Morrison is saying he’ll be a “street-level defender of the ordinary man and woman,” dragging the character both in the directon of more otherworldly and more down to earth, so we’ll see how that plays out.

I’m not so sure how to react to this, honestly. On the one hand, there’s the “Superman is so classic you can’t change him” argument, which has a lot of nostalgic cachet, but doesn’t hold up so well when confronted with the fact that Superman has changed over time, repeatedly: the original Superman couldn’t fly, was raised in an orphanage; Pre-Crisis Superman’s parents adopted parents were barely mentionable, Ma and Pa Kent have only really been prominent characters since the mid-80s.

The whole thing does leave me wondering if Grant Morrison particularly requested the ability to rewrite Superman’s backstory.

Well, there’s one way you can make me look at this less skeptically, DC. Make an homage to this: 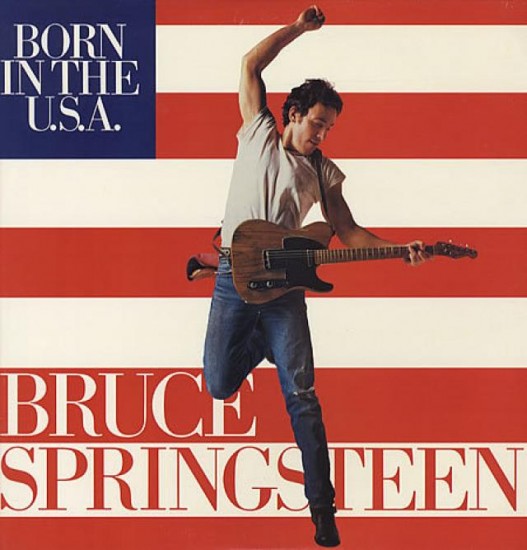 Either that, or draw me up the pity party where Batman, Superman, and Spider-man sit around talking about their dead relatives, and then Batman realizes, you know what, he’s still got billions of dollars in cash and can get tail pretty much any time he wants and leaves them pining after their continuity-redacted-marriages. 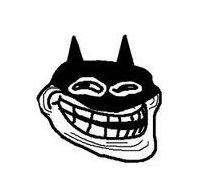