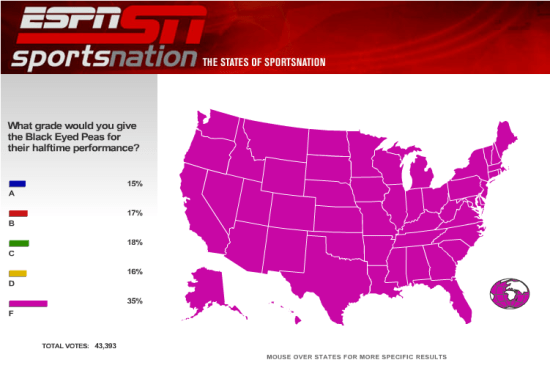 Don’t worry: It wasn’t just you. We all watched the same biblically catastrophic halftime performance by the Black Eyed Peas last night. And the entire United States agrees that this was maybe the worst possible thing that has ever assaulted our eyes, ears, hearts, and minds. And probably the worst thing that happened to Slash‘s reputation.

Reactions on Twitter ranged from confusion, disappointment, outright rage, and gnashing of teeth. This was a bad performance. And judging by the map, universally so. For one thing, there was Fergie. Fergie was the first headlining woman to perform at the Super Bowl since Janet Jackson‘s nipple showed up unannounced. And boy, did she bring the female power as she fought through painful, gut-wrenching contractions to push out some semblance of a singing voice as if it were a 20-pound baby trying to somehow extract itself from a womb the size of a grape and a birth canal the width of a toothpick. And much like a newborn, it was not as cute as you’d hope it would be.

It was hyper, it was kinetic, it was Tron-inspired … and then Slash came out, forever tarnishing his rock credibility in the name of a paycheck. I hope you like your dirty, dirty money, Slash. Because you are dead to everyone, including Michael Ian Black. Fergie also took the time to ruin “Sweet Child of Mine,” but she was kind enough to hit about one or two good notes. Thanks, Fergie.

Next year, get the Huff family to sing this song.

But then, Usher came out. And the apocalypse was truly upon us now. At this point, you could hear women weeping, lemmings jumping off cliffs, dogs and cats discussing living arrangements. If you weren’t having a panic attack by this point, your will is strong, and you will surely survive this epic battle.

And then Fergie sang “Time of My Life.” From Dirty Dancing. Too soon, Fergie. Too soon.

Don’t believe me? Or the rest of America? Judge for yourself. Here’s the video. Godspeed to you, dear friend.