k this is not wrong tho pic.twitter.com/B9JTw4pKPd

Twitter already feels like a trading card game in many ways — it’s a virtual hub of celebrities and famous faces, personas and brands, all interacting in a wacky web world. Even though it might feel like a game made up of fictional characters, it’s not. It’s populated by actual human beings, and what happens on Twitter can have significant real-life consequences.

That has to be a real buzzkill for the people who created this new Twitter app called “Stolen,” which adds a second level of gamification to the personal branding contest of social media by turning Twitter profiles into trading cards. Stolen allows users to bid on “ownership” of other people’s profiles. Sometimes this results in cute interactions, like the one above in which the “Emo Kylo Ren” Twitter parody account “buys” the official @StarWars account. Sometimes it results in far more unnerving situations, in which human beings “buy” a trading card of another human being, without their consent, with virtual currency — or with actual money, since micro-transactions exist in Stolen.

Much like the Peeple app, a controversial review site that got dubbed as “Yelp but for people,” Stolen encourages users to view other humans as objects. In this case, Stolen allows users to position Twitter accounts as trading cards, rather than as social media accounts that are managed by real people. Stolen doesn’t sound quite as bad as Peeple, admittedly, but both services began without realizing that users would want an “opt-out” feature. If you haven’t already opted out of Stolen, and you have a Twitter account, then you might want to do so — but you have to let Stolen have Twitter permissions in order to do it. 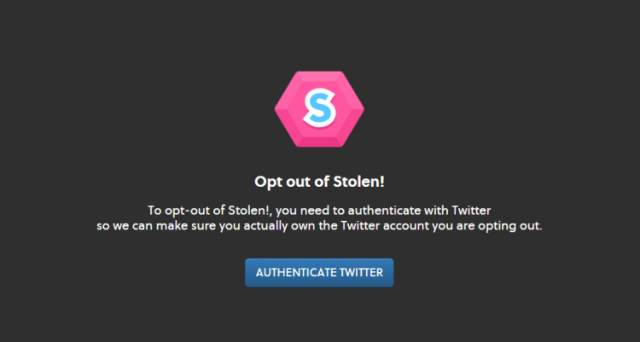 It’s pretty unnerving that you don’t have to authenticate with your Twitter account in order to be part of Stolen, but you do have to do that if you want to opt out. Feels backwards, doesn’t it? That’s more of a problem with Twitter itself, given that making a public account on Twitter means you’re implicitly agreeing to let app developers mess around with their API.

Gadgette just interviewed Siqi Chen, CEO of the company behind Stolen, and unfortunately, it doesn’t sound like these problems had occurred to him. He seemed vaguely aware that people might be able to use the trading card system to abuse others, since once you “steal” someone’s card, you can deface it writing that will appear publicly. Still, Chen doesn’t seem aware of the extent to which this might unnerve people.

“We were hoping, and so far this has been the case, most people are intrigued and find it to be a compliment,” he says, admitting that he does understand why some might see words like “own” and “buy” as being “gross” when applied to people. But Chen seems largely optimistic about the service:

As you mentioned it’s our interest to keep Twitter users happy, and the truth is if you look through Twitter the masses already find it really interesting. You have Linkin Park playing, Jérôme Jarre, very well-known Twitter people, and they enjoy it because they understand that this is a compliment and it’s a way for fans to show appreciation by having them in their collection, and that’s absolutely what we designed it for.

See? It’s supposed to be a compliment! I’ve heard that one before …

Anyway, there are “hundreds of thousands of downloads” so far, according to Chen. Until Holly Brockwell of Gadgette expressed reservations about the service and published the interview today, it seems as though Stolen has largely been seen as a success by its creators. Chen seems to think that the app’s problems can be solved with its opt-out feature and also by banning any users who harass others; he stipulates that “we are firmly against the any kind of harassment, abuse, misogyny, or racism in our product and our policies and tooling will reflect that.”

It’s not clear, however, whether or not there is a reporting tool within Stolen that would allow users to report harassment. Chen’s use of the future tense when describing anti-harassment policies makes it sound as though they have not yet been implemented; the app has thousands of users, but Chen makes it sound as though it’s been completely problem-free so far, which seems unlikely to me. Chen seems surprised by Brockwell’s questions throughout this interview, as though she is the first person to raise these concerns to him.

Even if Chen and his colleagues do commit to a more comprehensive anti-harassment strategy — other than just saying they “will” ban harassers “if” they appear (trust me, guys, they’re already there) — I’m not convinced that the inherent structure of Stolen will ever resonate with someone like me. Social media already feels dehumanizing to me and to many other people; this app epitomizes and exacerbates the aspects of social media that already make me feel uncomfortable.

Stolen’s language about “buying” and “selling” and “owning” people’s profiles — it all just reminds me that my social media profile is an object for other people to ogle, whether they’re corporations or stalkers. What’s really sad is that this didn’t occur to any of the people working on Stolen. They only saw the optimistic and “fun” ways of viewing the app — the fun parody accounts, like Emo Kylo Ren, interacting with brands like Star Wars. They didn’t remember that real people would also be impacted by what happens on the internet, and that real people don’t always behave in cute, fun, accessible ways. I hope that these developers take a step back and really consider the type of projects that they create in the future.