THE TITLE IS A LIE (AGAIN)! 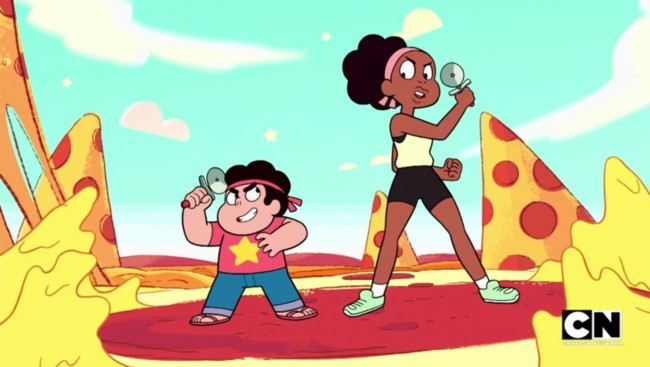 The Recap: When Steven accidentally projects himself into Kiki’s dreams and saves her from a giant pizza monster, she asks him to help her out with what turns out to be a nightly stress dream.

I always kind of figured we’d see an End of Evangelion reference someday, ever since the “Congratulations” scene in “The Test.” I did not think it would take place during the pizzapocalypse. Let us all take a moment to pity the poor, unsuspecting souls who decide to research the background of that homage (I feel it my duty to inform you I had “Komm, Süsser Tod” on repeat while I was typing this recap).

Even putting aside that moment of nerd recognition, this episode turned out to be a real treat. This is the first time Kiki’s had any really meaningful screentime outside of the restaurant, and while that means she’s still several steps behind on character development in comparison to some of the rest of the show’s secondary characters, she makes up for it with simple likability. Both Kiki and Jenny are voiced by Reagan Gomez-Preston, so this gives her an extra opportunity to show off her range (three, if you count the horrifying melty-cheese Jenny).

And maybe that element of familiarity helps sell what’s comparatively a pretty late-game introduction, but it’s hard to mind. Kiki is sweet and thoughtful in a way that would seem exceptional in other shows but is fairly par for the course on Steven Universe…which makes it all the more interesting when the script takes the opportunity to talk about boundaries.

This is an ambitious subject for a new member of the Crewniverse (Colin Howard, boarding alongside writer Jeff Liu), which is probably the other reason that we’re spending time with a relatively unexplored character: Howard gets to ease into the world by working on a very season 1-esque “Steven and one other person” style plot, confined even further to the surrealism of the dreamscape (Dream Warriors!). This isn’t the first time dreams, or even the question of how they interact with Steven’s powers, has come up in the show, so while it’s a time-tested approach to working through emotional issues, it also fits within the show’s larger landscape (a story about a teenager being pushed to sacrifice for someone else until their mental health begins to dangerously deteriorate…wait, I think I’m getting the EoE reference now).

And the simplicity is a benefit in the end–as I said, the issue of boundaries is a complex one, yet another in the realm of “things even adults are still figuring out.” SU is a show that emphasizes empathy and support for others, something that can be downright exhausting if attempted 24/7. “Nigh-tireless caring” should practically be listed on Steven’s list of powers. And while that’s beautiful and part of what makes the show work, it’s equally important (and refreshing) to see an emphasis on self-care too. It’s okay to say you’ve reached your limit if helping someone else has started to hurt you. It doesn’t mean you don’t love that person and want to support them–it just means that you’re worth caring about too, and that if you’re not taking care of yourself you won’t be much good to others either.

That’s a simple message with a lot of bigger, more complex implications in the adult world with things like mental illness and addiction, but the take here is approachably simple without losing the broader application as the audience starts scaling up. Liu has a wonderful soft touch for stories like this (particularly with episodes like “Friend Ship,” “Sworn to the Sword,” and as far back as “Lion 3”) that touch on hard subjects without losing the reassuring grace note that things will ultimately turn out alright. Since the Crewniverse frequently works in established, semi-set storyboarder/writer teams, I look forward to seeing how Liu and Howard work on more dense and Gem-centric episodes. Maybe something Homeworld-related?

I have particular love for those last few seconds. Jenny can be thoughtless, even in the final moments, but she wants her sister’s happiness even if it means having to actually work in the restaurant for a while. It’s a great button to close off a story about establishing one’s own voice, coming back around to the idea that good relationships are made both of caring for one’s own happiness and being thoughtful to others and willing to give a little extra from time to time. And it also brings a close to Steven’s run of mishaps with Beach City’s residents and his burgeoning powers and influence, with him serving as the facilitator for Kiki to solve her own problem rather than swooping in to fix it for her.

Wednesday’s episode should come as good news to those of you champing at the bit for more Gem-centric content. It looks like we’ll finally be seeing the return of Centipeedle. See you there!

Vrai is a queer author and pop culture blogger; they suspect Peridot would really like Rei. You can read more essays and find out about their fiction at Fashionable Tinfoil Accessories, support their work via Patreon or PayPal, or remind them of the existence of Tweets.