No One Wants to See Steve Bannon’s Stupid Trump Documentary

Or eat dinner with him. 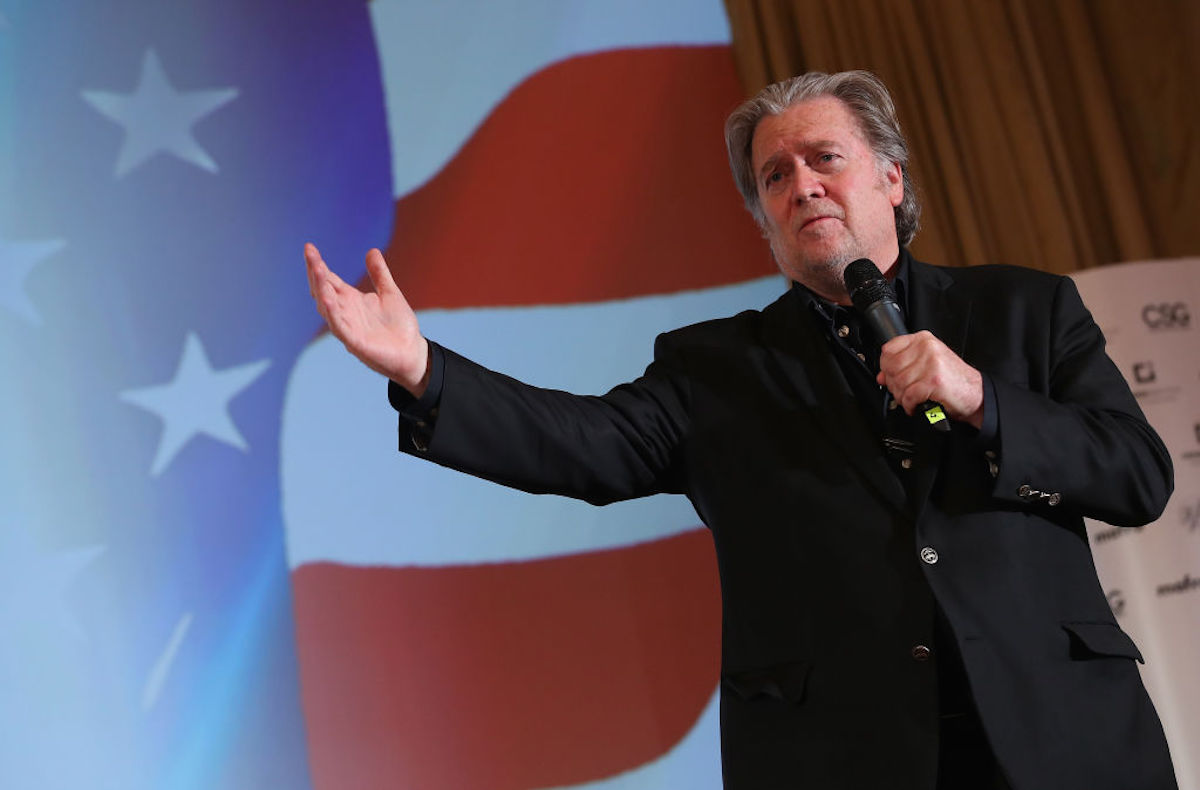 Steve Bannon has a new documentary out, meant to galvanize Republicans ahead of next month’s midterm elections. The film, Trump @ War, is full of scenes of Antifa protests, MAGA hats burning, and other images, as Axios put it, “designed to portray Trump supporters as being under siege.”

But the turnout for a screening of the film on Trump-leaning Staten Island Monday night had a less than galvanized turnout. And since we’re talking about someone who has built his career on the single issue of normalizing and popularizing bigotry, I have absolutely no qualms over cackling with delight at his failure here:

Hahahah…it’s like a bad SNL skit. A dozen people in a motel conference room. https://t.co/gTz6QdtbCb

That’s such a sad picture. That’s, like, Kirk Cameron birthday party levels of sad. Bannon insisted to the New York Daily News that he doesn’t mind the small turnout. He says he’s done plenty of screenings with fewer than ten attendees, which probably wasn’t meant to be such a major self-own.

He said he doesn’t need “massive events” for the film, but rather “grassroots leaders.” But he reportedly reached out to local “grassroots leaders” (including one man who humbly refers to himself as “Mr. Staten Island” in regard to how much influence he wields) to help publicize the screening, and they still only drew 38 people.

This looks like the recruitment meeting for a pyramid scheme to sell catheters https://t.co/xT9qteDJ9j

I’ve been to Board of Zoning Appeals meetings in Cambridge MA that drew bigger crowds to talk about signage, roof decks, and entryway modifications.

I even feel sorry for this plate of food.😆 pic.twitter.com/3vWcfsVXkm

These aren’t the only rooms Steve Bannon is having trouble filling. A Republican fundraising dinner with Bannon as the big draw had to slash ticket prices this week. Originally, it cost $20,000 to buy 10 seats at Bannon’s table, $1,000 for a VIP ticket, and $125 for general admission. Tickets were lowered to $5,000 for the 10 “chairman’s table” seats, $300 for VIP, and $50 for GA. They also added student tickets with no food or alcohol for $15. “We want to pack the house,” the event organizers wrote on Facebook.

That apparently still didn’t work because according to the Tampa Bay Times, prices have been reduced again, this time to the low low price of … zero dollars. Which, to be honest, is still too high a price for an evening with Steve Bannon where, by the way, you have to sit through a screening of his movie.