Bon Appétit can't find the recipe for equity and inclusion. 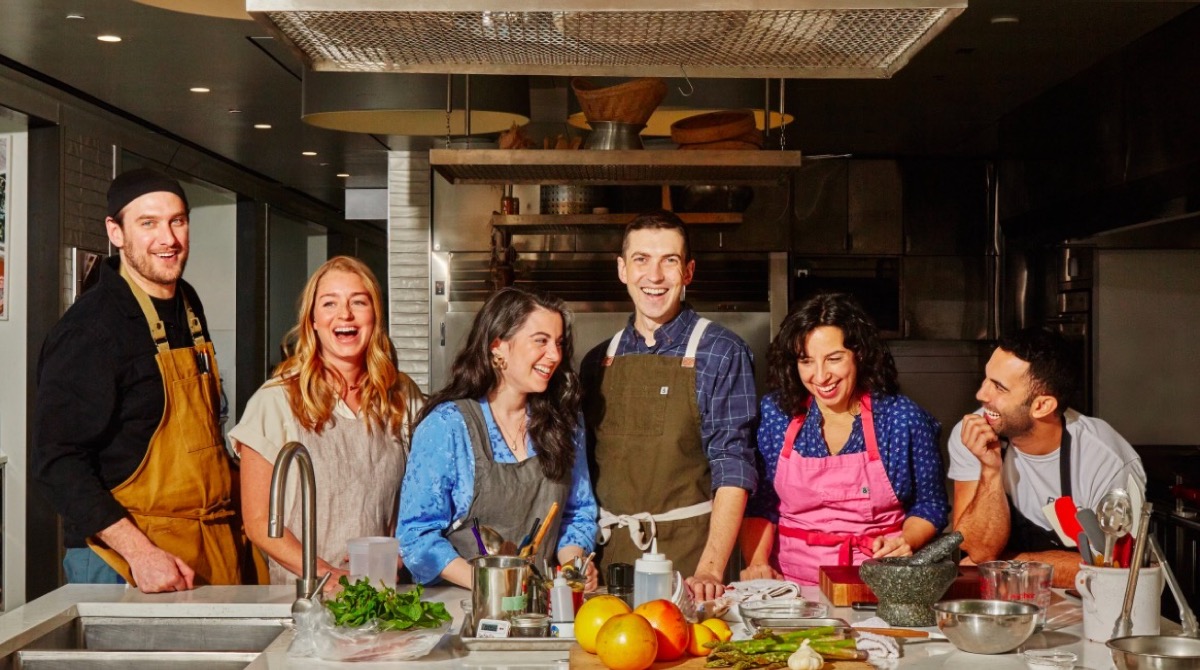 After being publicly shamed and called out for their treatment of BIPOC employees, you would think that Bon Appétit Test Kitchen would have learned their lesson. But of course they didn’t, and as a result, the popular YouTube channel is losing three of their BIPOC stars. After weeks of contract negotiations, Priya Krishna, Rick Martinez, and Sohla El-Waylly have announced they will no longer appear in videos for the company.

The company made headlines earlier this summer after photos surfaced of Editor-in-Chief Adam Rapoport in brownface (Rapoport has since stepped down from his post). In response, many BA employees of color started to speak out about the unfair treatment they received, including El-Waylly posting on Instagram that people of color were not getting paid for their on-camera work.

Fellow staffers followed suit, detailing a toxic work environment where BIPOC voices went unheard, and contributors of color were siloed, ignored, and making less money than their white counterparts. In the wake of this reckoning, Bon Appétit and their parent company Condé Nast promised to “do better” and would introduce plans to address diversity, talent development, and the BA community.

But talks broke down, according to three stars, who detailed the negotiations in a series of posts on social media. BA offered a new tiered payment plan which would have resulted in Martinez earning LESS money than he did previously, and a modest bump for Krishna. Both offers were still well below what their white co-stars earn.

Krishna wrote, “These past few months have been disappointing and insulting. I am constantly being told that I am an important part of the test kitchen, yet leadership refuses to acknowledge that in the form of compensation or opportunities … I am thankful for the platform Bon Appétit video gave me. But I refuse to be part of a system that takes advantage of me, while insisting I should be grateful for scraps.”

Martinez posted his own experience in his Instagram stories, writing: 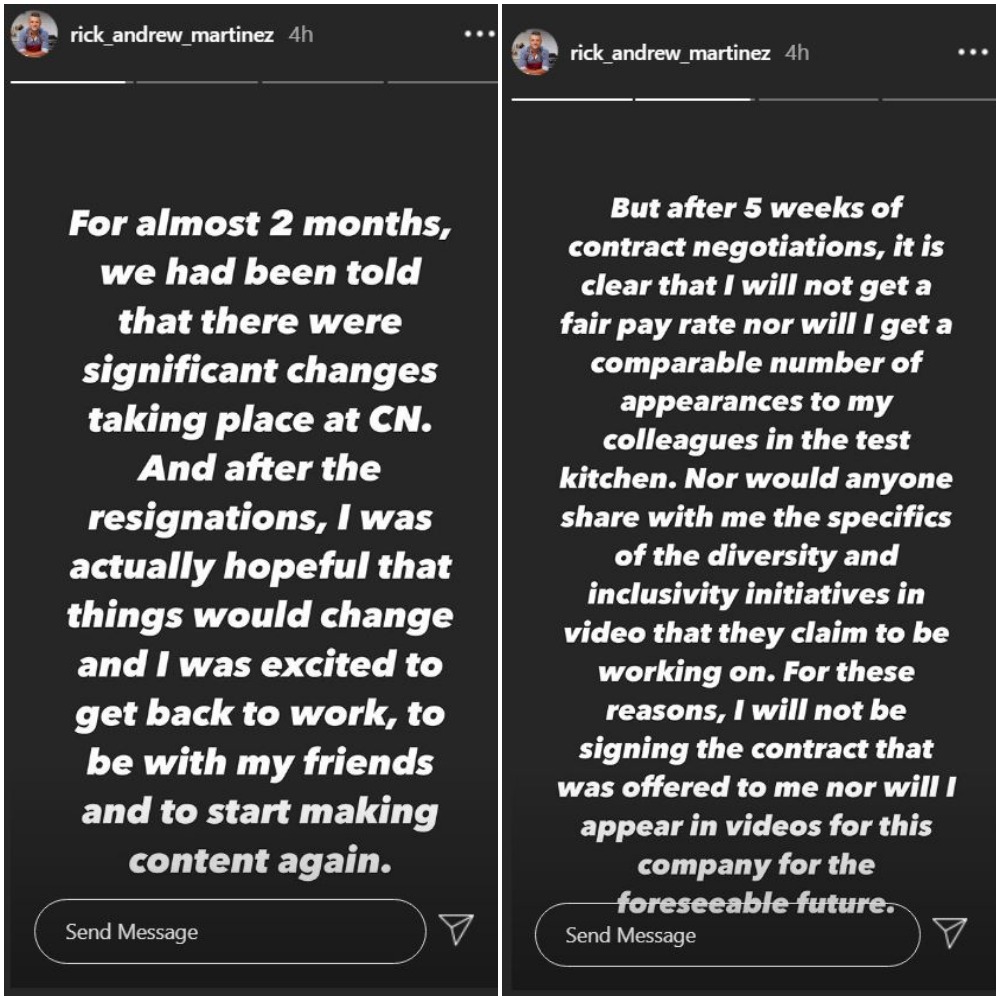 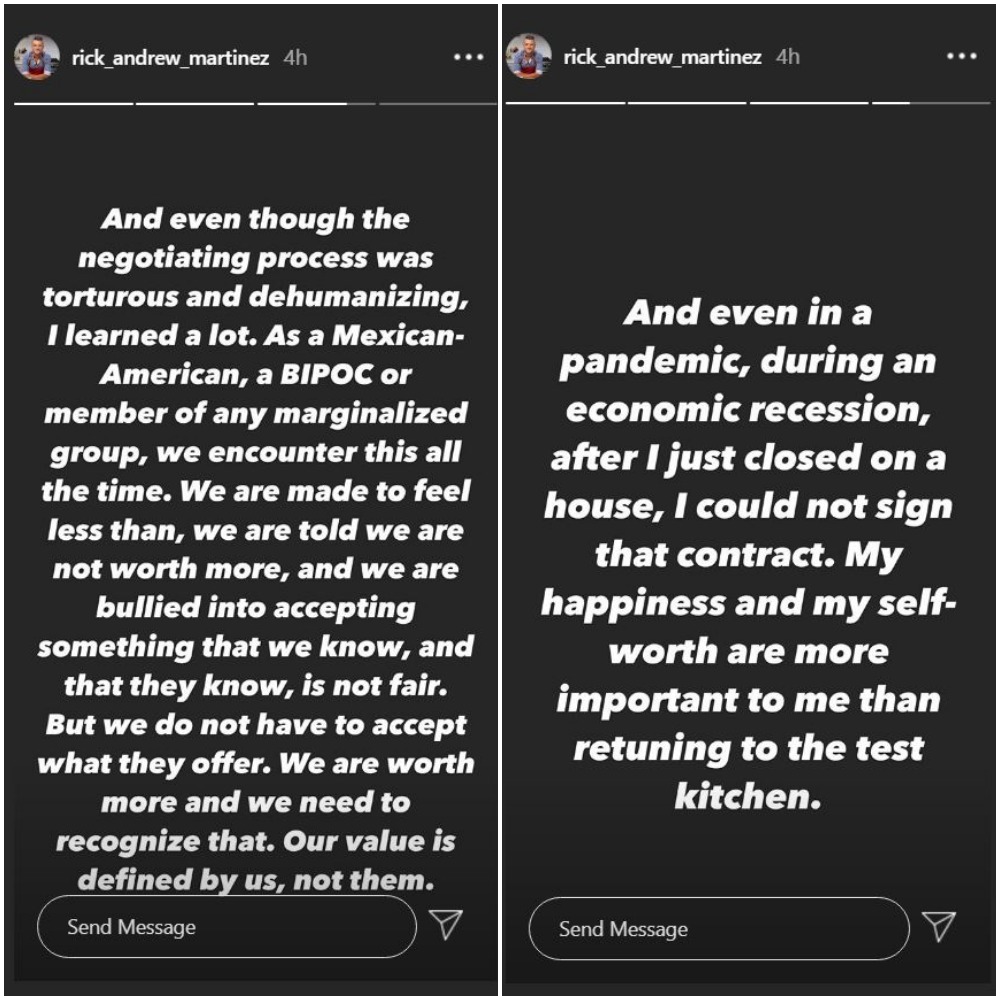 El-Waylly also responded in her own IG Story: 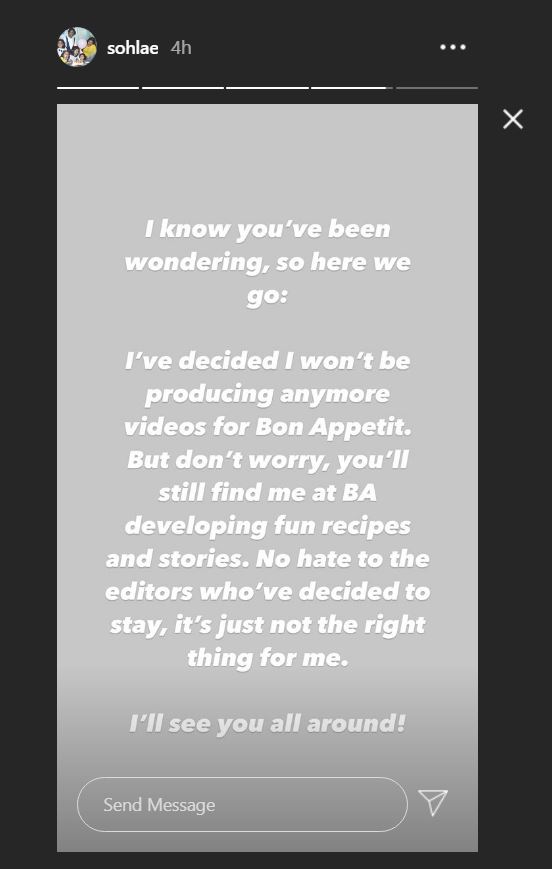 El-Waylly will continue to write content for Bon Appétit’s magazine and website, while Krishna and Martinez will freelance for the brand. It’s mind-boggling that Condé Nast wouldn’t rectify their gross treatment of BIPOC staffers, not only because it’s the right thing to do, but even as a self-preservation move. They must know they will only reap bad press for failing to fix the situation, or maybe they were hoping that the public would move on and forget what happened (they didn’t and they won’t, FYI).

El-Waylly said of the company, “I think they’re very risk-averse, … I think that more people of color are going to be more visible in food media. That’s more of a progressive thought, but Condé is a bit conservative and risk-averse. Maybe they’ll do it in five years after someone else makes it cool.”

Martinez added, “The only thing I can work out in my head is that the sanctity of the institution is more important than some of the people who work there.”

A Condé Nast representative released a statement saying, “We pay all our employees fairly, and in accordance with their role and experience … Our pay practices are in line with industry standards. To suggest that we are paying individuals differently based on race, gender or any other reason simply isn’t true.”

“I don’t think they’re going to invest in regular people ever again,” El-Waylly added. “If just part of the team returns and then new random brown people, that’s so transparent — people aren’t that stupid. But maybe if they get Beyoncé I’ll watch.”