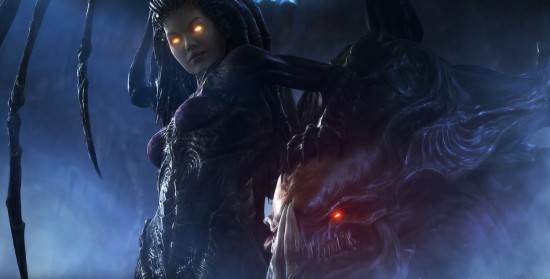 The good news is players don’t have to wait another fourteen years for the next installment in the StarCraft franchise.

As a World of Warcraft player, I am fairly inured to the Blizzard definition of “soon,” but now all my StarCraft loving friends can get a taste.

When discussing such future Battle.net features as trading replays, broadcasting replays, and upgrading profiles, [Battle.net Project Director Greg Canessa] said they were “a main area of focus we’re going to be seeing on the Starcraft [II] side over the next 18 months between now and Heart of the Swarm.”

What does this mean?  Well, as 1UP points out, at the most, this means that we won’t see Heart of the Swarm for another year and a half.  Canessa stressed later that his statement should not be taken as set in stone, because there is as yet no official release window for the game.

We are curious as to what exactly is going to get tied into Heart of the Swarm to pad out the development time for that long.  You’d think it would be an easy release, just an update to the single player campaign. Perhaps Blizzard is planning it as a full expansion pack, a la Brood War, in which case the extra time may be for balancing their perennially fine tuned games. For better or worse, you might want to put the next StarCraft installment in the back of your mind and focus instead on Diablo III, because it’s seems like that’s what Blizzard is doing.

Or, if you’re really hard up, Blizzcon starts in two weeks.