Getting to Mars isn’t terribly difficult, but scale is the problem. If we’re going to set up a colony there, which is Elon Musk and SpaceX’s goal, we’re going to need to send a lot of people and very heavy equipment out into space, which means we’re going to need a much more powerful spacecraft than anything ever launched before. That’s going to take some doing, and Musk just revealed how they plan to make it happen. (You can watch the replay of the full announcement here.)

What the announcement live stream didn’t really touch on was how the actual colony will be set up and how the life support systems will work, despite an audience member asking Musk if SpaceX is designing Mars toilets (really). Musk said he’s not too concerned about radiation in space aboard the ship, as long as they have appropriate shielding in place, and that a good permanent solution on Mars would be setting up an artificial magnetic field to mimic the one on Earth that protects us. Otherwise, he hopes that the brave explorers and private entities who want to go to the Red Planet will handle the specifics of the habitat and life support.

SpaceX, on the other hand, is more concerned with building the transport system, which Musk likened to creating the railroad to California, which opened the door to easily set up cities and towns on the west coast. Musk simply wants to facilitate the same thing for Mars. That brings us to the ship, which is going to be an impressive one. SpaceX just successfully test-fired their new Raptor rocket engine, which is 3 times as powerful as the Merlin engine—but the same size due to its increased pressure—used in the Falcon 9 rocket, and the boosters they’ll use to lift the Mars transport will use 42 Raptor engines each. The rockets will also land back on Earth like the Falcon 9 in order to cut costs and bring more ships to orbit. Musk estimated they could get the cost of moving to Mars as low as $100,000.

Here’s the ship next to a puny human (tiny, standing next to it on the right): 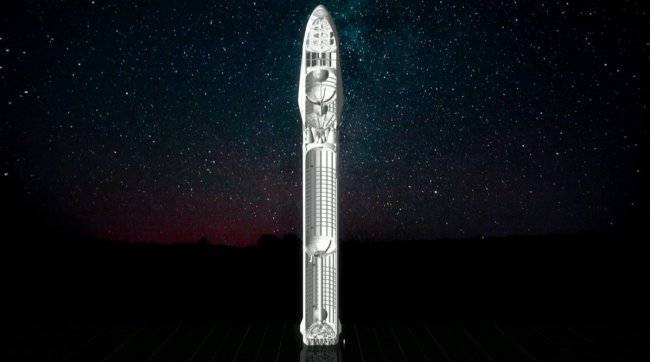 The video embedded above displays the entire launch and landing process, which Musk said isn’t just an artist’s depiction but an actual look at SpaceX’s CAD designs for how this should eventually look. The ship is planned to be able to take 100 people to Mars per trip (10,000 trips to take the 1 million people Musk thinks are necessary for a sustainable civilization), and it’ll take about 40 to 100 years of those flights to set up a full-scale civilization. He also mentioned in the Q&A portion that coming back from Mars is an important option to build in—even if people don’t wind up using it—if we’re going to convince people to take the already dangerous journey.

Musk said that the flights could begin as soon as 10 years from now, and he envisions them taking off as a fleet, “like Battlestar Galactica,” which he reminded everyone is a good show. In the more near-term, he wants to set up regular flights to Mars, bringing payloads on the SpaceX Dragon crew capsule. In the long term, his goal is about spreading humanity out and becoming a multi-planetary civilization, for which he envisions fuel depots on planets, moons, and asteroids for ships to hop around the solar system. It’s a lofty goal, but Musk made it clear that’s entirely by design: He wants us to be a civilization full of hope, trying to advance towards the future, instead of simply putting out fires here on Earth.