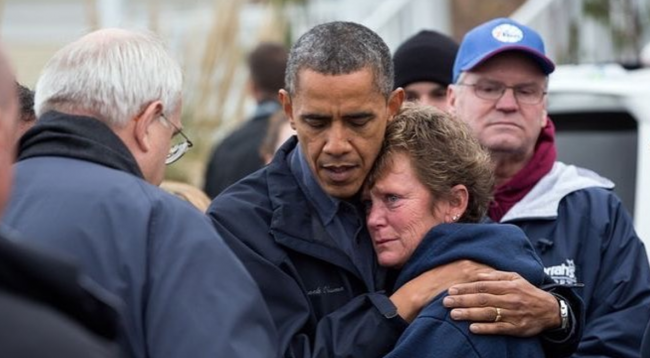 Pete Souza continues to deliver first class shade to the Trump administration. This time, he posted a series of photos of former President Obama visiting with victims who were caught in the aftermath of Hurricane Sandy in 2012.

President Obama with a victim of Hurricane Sandy. There are no Democrats or Republicans hurting in Houston; there are just Americans. At a time like this, it shouldn’t be about selling baseball hats or commenting on crowd size. It’s about helping our fellow human beings. Pets too. This storm is catastrophic, not epic. Thousands of people are affected. Please consider donating to the many charities doing good work in Texas and other states to come. I am donating to the Red Cross and other local charities today but please feel free to comment on other worthy charities that you would recommend to me and others. (UPDATE: As one of your fellow followers points out, The NY Times has a good list of how to help victims and avoid scams. I posted the link in my profile. But keep suggesting others.)

President Obama greeting people affected by an F5 tornado in Joplin, Missouri that killed more than 100 people in 2011. “But that does not mean we are powerless in the face of adversity,” he said. “How we respond when the storm strikes is up to us. How we live in the aftermath of tragedy and heartache, that’s within our control. And it’s in these moments, through our actions, that we often see the glimpse of what makes life worth living in the first place.”

They serve as a stark contrast to the Trump’s poor, misguided visit with victims of Tropical Storm Harvey. As Vivian wrote in a post covering the terrible optics of his visit, Trump commented on the turnout of people during his visit. Yeah. He showed he was mostly concerned with how many people came to see him. Never mind that those folks are all victims of a devastating natural disaster; he thinks they’re all there to see him and that’s all that matters, right?

Trump to hurricane victims in Corpus Christi, TX: “Thank you everybody. What a crowd, what a turnout.” (via Reuters) pic.twitter.com/kVe3f8NmTL

To contrast, in Souza’s photos, you can see an actual president doing what a good president should do: visiting with victims, offering them comfort and strength while commiserating and sympathizing with their unimaginable loss. Though obviously it’s impossible to do this for every person affected by the tropical storm, it should be a priority to provide comfort for even a few families, and not be overly concerned with “turnout.”