Hey, Edward Snowden? Now Would Be a Good Time For You to Advocate for Chelsea Manning

Snowden requested a presidential pardon today. But what about Manning? 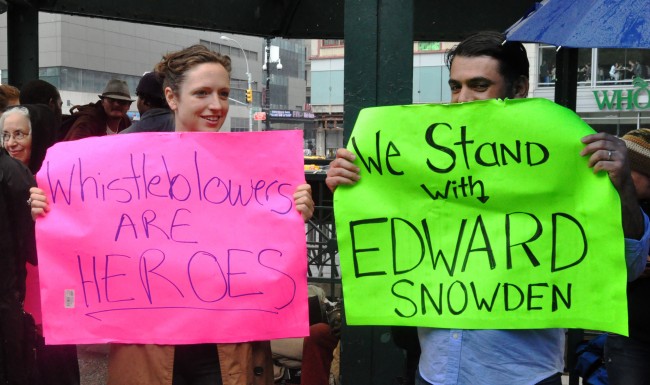 Edward Snowden has become quite a popular figure. The former NSA contractor who leaked thousands of classified documents to the public in 2013 has ended up with a heroic reputation, in spite of the fact that the U.S. government might not see him that way. The famous whistleblower is currently living in Russia in order to evade potential legal consequences, but in spite of being on the run, he’s managed to do several popular media appearances from afar. Snowden has also got a biopic coming out this week, featuring A-list star Joseph Gordon-Levitt in the lead role.

With all eyes on him–this week more than usual, thanks to the biopic–Snowden made his case for receiving a presidential pardon, telling The Guardian, “Once the officials, who felt like they had to protect the programmes, their positions, their careers, have left government and we start looking at things from a more historical perspective, it will be pretty clear that this war on whistleblowers does not serve the interests of the United States; rather it harms them.”

The Guardian’s coverage of Snowden’s situation also makes very brief mention of another well-known whistleblower: Chelsea Manning, whose experiences after having been imprisoned have been harrowing, disturbing, and inhumane. Manning’s name has also appeared in the news several times this week, because she has recently begun a hunger strike in an effort to demand better treatment. The Daily Beast has a lengthy rundown of the humiliations that Manning has endured while imprisoned, most of which revolve around the refusal to respect Manning’s gender transition.

For example, the Department of Justice has refused to allow Manning to grow her hair any longer than two inches, claiming it would “pose a significant security risk,” and that because she is still “housed in a male facility for male military inmates,” she must obey that facility’s rules about hair length. This, obviously, provokes the question as to why Manning has been forced to stay in a prison for male inmates as opposed to one for female inmates.

As a result of these stresses, Manning has attempted suicide, and she has been punished further for this suicide attempt, rather than accommodated or treated humanely. All of this has led to her hunger strike this week, as well as her public statement to authorities and to her supporters, which stresses,

“I need help. I needed help earlier this year. I was driven to suicide by the lack of care for my gender dysphoria that I have been desperate for. I didn’t get any. I still haven’t gotten any.”

Meanwhile, Edward Snowden continues live a life of relative freedom in Russia; he’s on the run and in hiding, but he’s in a much better position than Manning. Snowden’s own Twitter timeline is currently stacked high with retweets about media coverage of his upcoming biopic. Snowden did retweet one story in support of Manning yesterday, but then again, he also recently retweeted someone else critiquing the media’s treatment of Julian Assange–who, in addition to being a fellow whistleblower, has also been accused of sexual assault. We clearly can’t draw any conclusions about Snowden’s positions on these people based merely upon retweets, anyway.

How does Snowden feel about Manning’s situation, then? He hasn’t had much to say about it lately, but it turns out that he owes a whole lot of his own safety to Manning, since she laid the groundwork for him in terms of how to approach a classified leak. Back in 2013, he told Rolling Stone that he had studied her case and thought about its potential drawbacks while considering his own plans to leak classified documents: “I don’t desire to enable the [Chelsea] Manning argument that these were released recklessly and unreviewed.”

By treading carefully, by escaping legal trouble ahead of time, and by continuing to do charming press interviews from afar, Snowden has successfully cultivated a popular public image for himself. Glenn Greenwald, another famous whistleblower and a peer of Snowden’s, addressed in a Newsweek interview last year that Snowden’s careful planning, as well as the fact that Snowden is a cisgender man, all contributed to how he became a media darling:

“I think the big problem is that it’s really hard to humanize Chelsea Manning because she basically has been utterly silenced from the time she was arrested until today. She’s not allowed to talk to the media. She was put in this pretrial detention, where she was basically in this black hole, and so there’s been no ability on her part to make public appeals or really to just make her case about why she did what she did or anything like that …

Even before she announced that she was a transgender woman, which she did basically after her trial concluded, there were [these] really terrible articles all but stating that the reason she did the leaking wasn’t out of principle or anything like that but because she was struggling with gender issues and making her seem mentally and emotionally unbalanced.”

Greenwald was one of the people who helped Snowden to cultivate this positive public image, which the pair of men planned out together after seeing the difficulties that Manning had faced. Greenwald explained, “I worked a lot on the Manning and WikiLeaks story, and I tried to learn some of the lessons from that when we did Snowden, and one of the things I knew was making him relatable as a human being was going to go a long way in determining how these disclosures were perceived.”

Rolling Stone’s coverage emphasizes that this plan worked: while Manning’s face had once adorned fans’ paraphernalia for WikiLeaks, it was soon replaced by Snowden’s name and face. Snowden’s carefully curated persona clearly paid off for him.

Perhaps Snowden does not realize the position of relative privilege that he occupies in comparison to Chelsea Manning. He and Greenwald studied her situation in order to ensure that Snowden would be safe and would be seen as a hero by the public; they directly benefited from suffering that she endured. Greenwald seems aware of this, having done interviews in an effort to shine a light on the issue. Snowden, however, seems more reluctant to speak out about the disparity between them, instead focusing on his own situation.

It makes sense that Snowden would be thinking about himself, but it’s also depressing behavior to see from a man who is supposedly a hero and a brave person who puts everything on the line for the sake of his fellow citizens’ safety. Compared to Manning, Snowden’s situation looks quite comfortable–and the entire reason why it has been comfortable for him is because he was able to look at Manning’s situation first and avoid it based on what he saw happen to her. Plus, it helps that he is a cis man and therefore able to take advantage of society’s bias in his favor.

Can you even imagine a world in which Chelsea Manning is seen as an equal hero to Edward Snowden? Perhaps one day we will see Manning freed and able to tell her own story, as well as a Chelsea Manning biopic, ideally with a trans creative team at the helm. Instead, we live in a world where Snowden has been elevated as a more pleasant, relatable, and convenient hero for progressives to name on their protest signs. Meanwhile, Chelsea Manning’s own contributions to the success of her peers have been ignored.

Snowden should be using this week to champion her efforts and point a spotlight at the struggles she has endured, since the public’s eye will be on him as his biopic comes out in cinemas. It’s questionable that the public would even see him in a favorable light at all nowadays if Manning hadn’t laid down the groundwork for him ahead of time. If Snowden believes that whistleblowers deserve better treatment by the government, then perhaps he should consider advocating for someone who actually got arrested for whistleblowing and who currently faces years upon years of further inhumanity in prison.