The Latest Smash Up Expansion Is Pretty AND Deadly 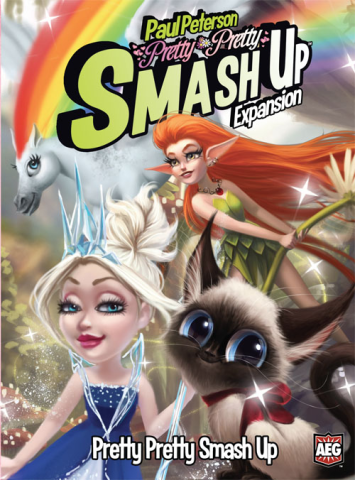 I don’t know what you’re doing right now, but if you haven’t yet played Smash Up … you are straight up invited to come over and play it with me. I need more people to introduce this game to.

I’m pretty new to tabletop gaming—I’ve always avoided strategy games because my brain is bad at … er, strategy, but over Thanksgiving, my sibling brought home Smash Up, and despite the fact that I picked a horrible combination of factions, (never, ever pick Ghosts with Bear Cavalry), I became obsessed with this quirky card game. I got my own set, along with the newest expansion pack: Pretty Pretty Smash Up. This set of cards promised four new factions that would teach you a lesson in “the nicest way possible”: Princesses, Fairies, Mythic Horses, and Kitty Cats. I was tentatively excited. I wanted to play with a deck of cats, obviously, but what if they cards were weirdly sexist or the powers were flimsy?

I’ve now played with this deck many times, and I can assure you: These new factions kick ass. Like, a lot of it. Princesses is my go-to power pack, even over Dinosaurs and Robots now, and Mythic Horses is my favorite deck of all because of how it’s structured. The VP tokens look awesome too, with their pink and purple flowers and hearts. The creators of Smash Up did a fantastic job of making these factions as hard-hitting as all the others—a beautiful feminist statement within an awesome game: “Girly” is powerful too.

Princesses is a really powerful deck. It has tons of minions worth 5 points—kind of a rarity. It also has Heirloom cards, which you can stick on your minions for more points. The more Heirlooms you play on a card, the more powerful it becomes, and a hilarious aspect of this deck is that the old-timey princesses without copyrights, like Snow White and Sleeping Beauty, are featured and have their normal names, but there are more … animated princesses in the deck that pay homage to more modern tellings, like Eliza, the snow princess, and Marie DeGraw, the princess from New Orleans—or Princess Apricot, who lives in the land of flying turtles. My favorite action card in this deck is Skillet, used to destroy someone else’s minion and draw a new card. I think Rapunzel would approve.

Fairies is an action-packed deck—your actions, your extra actions, and destroying other people’s actions. There aren’t any above-average, high-level minions, but this faction brings a lot to the table with action cards like Enchantment, Fairy Ballet, and Ladybug, which all help you make the most of your powers while blowing up other people’s chances. I love that the names of the cards are so lovely and magic-oriented, but this deck is as powerful as Wizards or Tricksters. This deck is also pretty talented—there are lots of talents, like transferring actions from card to card. I also love that there are references in the deck to famous fairies, like your Tink and Puck minions, or the highest level 5 minion, Tatiana the faerie queen. I’m always up for a good Shakespeare reference.

This faction is super clever: the Mythic Horses cards are all about herding. The more minions you play on the same base, the more powerful all of them become. Your action cards are mostly related to grouping them together, and you get lots of chances to play extra minions on the bases where you already have them. The Seastar minions are particularly useful, because there are a lot in the deck, and they allow you to play an extra minion automatically, without having to use another action card. The card designs are really funny; they’re often My Little Pony-esque, but if you look close on each of the illustrations, you’ll see the colorful horses and ponies are usually squishing another faction with their hooves or kicking them. I love the action trump card for this deck, too—Super Future Space Armor Power is an intimidating unicorn with silver armored plates. This card gives every minion you have on a base with another of your minions +2 power till the end of your turn. It’s a super easy way to break a base. I’M A FAN.

Last but not least, Kitty Cats:

Cats are sneaky—in general, but also in this card game. This deck is all about destroying other people’s plans. Cats can take control of other people’s minions, often right before a base scores. You can picture them waiting under the couch to pounce. Can Has Cheezburger? action card allows you to grab someone’s minion of power 3 or less right before the base scores. Cat’s Paw lets you take control of someone else’s LEVEL 5 MINION till the end of your turn. MeOW. The minion designs range from grumpy kittens to sneering persians in top hats to Queen Fluffy, the highest level minion and scariest, most beautiful kitty of all. Kitty Cats are a great assault deck, one that’s comparable to Ninjas, so they pair well with a straight-forward higher points deck like Robots or Princesses. My favorite action card is “Hissy Fit,” a hairless hissing Sphynx, an ongoing action that you play on a base. It lowers everyone else’s minions played on that base by -1.

I feel like my cat would really enjoy this deck.

Major props to Paul Peterson and the Smash Up team, as well as the fans, for putting together such a great expansion pack with deadly decks full of rainbows, fuzzy kittens, and floofy dresses.

Molly Booth is a freelance writer and author of the YA debut, Saving Hamlet, coming from Disney-Hyperion publishing house in 2016. She writes books about Shakespeare and feelings. She was homeschooled through high school, which means she gained her Geek/Nerd/Dork Certificate at an early age. She lives in Portland, ME and has almost too many pets. Almost. Follow her on twitter andtumblr for more nerding.