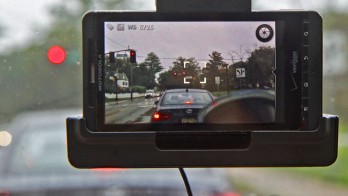 We’re getting to the point where smartphones can do everything PCs do and more. They play and store media, let us read emails, surf the web, take pictures, so why not give them another challenge and let them help us drive our cars? A new technology, SignalGuru, is aiming to do just that and the results are looking promising, according to researchers from MIT and Princeton.

The main thing SignalGuru tries to do is help you pace yourself so that you can time traffic lights perfectly, just like you do out of sheer luck every now and again. SignalGuru, through the use of a smartphone’s camera, GPS and traffic signal data, might be able to make this an everyday occurrence by anticipating when a dumb (fixed interval) light will change with a margin of error around two-thirds of a second and when a smart (varies based on traffic flow) light will change with a margin of one to two seconds.

Of course, the smartphone isn’t going to just collect and process all the information and then sit there smugly, keeping it all to itself. The idea is that through either text or audio instructions, your phone will tell you to either maintain speed or decrease it (it’ll probably never tell you to increase for liability reasons) in order to hit that next light perfectly. The resulting efficiency could cut your fuel costs by up to 20%.

The hope is that, ultimately, your smartphone might be able to help you with other things as well, like seeing parking spots or keeping track of gas prices. Those are slightly more sophisticated things for a camera to see and isolate, but it could be a nice little feature if it ever became efficient.

You’d think that this techology might occur naturally after most cars have cameras built-in, but the issue is that that is a very slow process. For the time being, many drivers are already investing in windshield smartphone holders, so using the smartphone’s already outward facing camera just makes sense. Although you may not want to have a smartphone yelling at you to slow down if you want to catch that next light even though you’re already late, it might be tolerable if the thing is actually right. Aside from getting cars to drive themselves, this seems like the best, most practical way to start improving fuel efficiency and minimizing time spent shooting your fingers at the stop light, just hoping it’ll turn green.