Man Gets Smartphone Dock Built Into His Prosthetic Arm 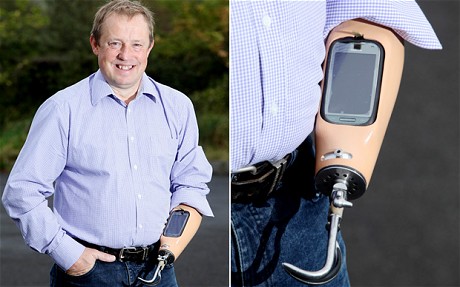 Trevor Prideaux, born without a left arm, used to have trouble using cell phones. It wasn’t so bad until the smartphone revolution happened and he found himself having to balance the phone on his prosthetic arm for use. Then, he had an idea that’s practical only if you have a prosthetic arm: Why not just put the phone right in there? And that’s what did. His Nokia C7 sits just right inside the arm, freeing up his other hand to use it.

Now that’s pretty cool, but there’s a little more to the story, the Nokia C7 was actually Prideaux’s second choice. The idea actually came to him while he was trying out the iPhone and balancing it precariously on his arm. Struck by the idea, he contacted Apple to see if he could get an empty casing, for measurement and testing purposes, but Apple wasn’t too keen on the idea. The folks at Nokia, on the other hand, were more than happy to work hand-in-hand with the technicians at the Exeter Mobility Centre, where Prideaux gets all his limbs.

When you think about it, it’s pretty staggering that, as far as anyone can tell, no one has ever done this before. As anyone with a smartphone knows, no matter how many arms you have, it’s hard to hold the thing and use it at the same time. Granted, most people have two hands, but some people don’t, and this could help them get more use out of a fantastic invention most of us really enjoy. Hopefully the trend will start catching on, and who knows what kind of other things we can start embedding in prosthetic arms. Chargers? Projectors? The possibilities are endless! Of course, it makes upgrading kind of a pain.