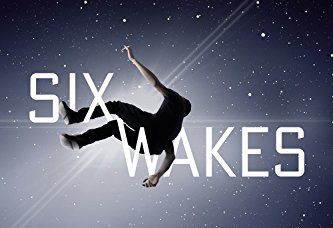 There’s a killer aboard the interstellar spaceship Dormire on its 400-year journey, and the victims, newly awakened in cloned bodies, are the ones trying to figure out who it is before it’s too late. This is the new sci-fi novel Six Wakes, by Mur Lafferty.

On top of all that, the crew awakens to find that their ship is off course, and all may not be as it seems with their mission, either. Sci-fi and mystery fans, this one’s for you. About the author:

“Insightful, witty, and passionate, Mur Lafferty is a pioneer in podcasting and an exciting new voice in urban fantasy.

Books:
Building her audience since 2006 with podcast- only titles, Mur has written several books and novellas. Her first professionally published novel, The Shambling Guide to New York City, debuted with Orbit Books in 2013. The sequel, Ghost Train to New Orleans was published in March 2014. She writes urban fantasy, superhero satire, afterlife mythology, and Christmas stories. All of her early works are available via podcast and ebook.

Six Wakes is in stores today, from Orbit books, and we’ve got an exclusive excerpt to share with you: