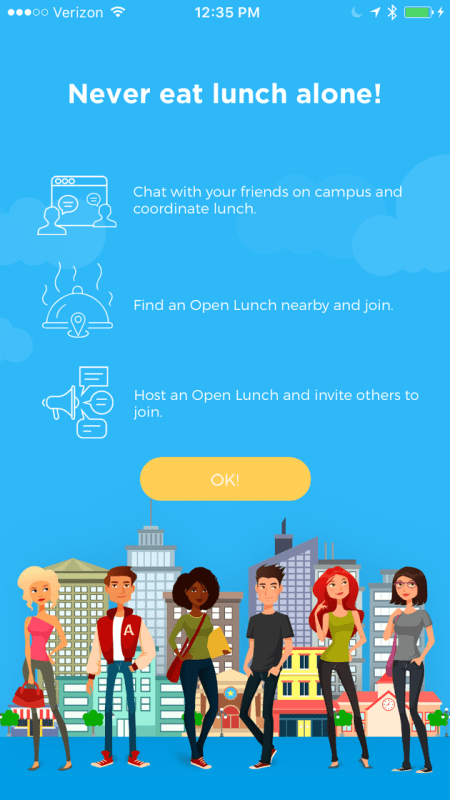 A lot has changed since I was in school, but it sounds like one big stressful aspect of a typical school day hasn’t changed a bit, and that’s the politics of the lunch table. Meeting new friends, figuring out where you fall in the social hierarchy, and getting rejected in public? All of these stresses still exist for the modern student, and now kids also have to worry about getting bullied by those same peers on social media, too! What’s a shy teen to do?

That’s what Natalie Hampton, a 16-year-old from Sherman Oaks, CA, also wondered when she ended up sitting alone at lunch for her entire year of seventh grade. Now, Hampton has reached her junior year of high school and she’s got plenty of friends, but she still sees kids sitting alone at lunch. She decided to create a tool that would help her peers fast-track new friendships at school–her app is called “Sit With Us,” and it just launched on September 9th.

Hampton built the app while keeping in mind the potential for bullying, since she’s no stranger to that experience herself. She told the LA Daily News that back in middle school, she not only sat alone at lunch, but also felt afraid of bullies, one of whom threatened her with a pair of scissors and made fun of her for tripping in the hall. “I was a shell of the person I was. When I walked into a classroom I was planning an escape route,” she said.

Sit With Us aims to counteract the potential for public humiliation (whether in a visible online space like Facebook, or a crowded in-person place like the cafeteria) by keeping all interactions private, as Hampton explained to NPR: “This way it’s very private. It’s through the phone. No one else has to know. And you know that you’re not going to be rejected once you get to the table.” Kids who use the app can designate themselves as “ambassadors” and then post “open lunch” events at specific tables, where anyone can come and sit down. Kids can also request to join tables through the app rather than getting shunned, ignored, or mocked once they reach the table in person.

For kids who are new to a school, or kids who’ve already been rejected from several tables and are tired of eating alone in the bathroom or in a classroom, Sit With Us sounds like a great option, assuming it catches on with enough students. It’s also particularly important for kids who are already socially situated–as Hampton now is–to demonstrate to their peers that it’s “cool” to be welcoming and open-minded. Studies show that when popular students stand up against bullying, it really does help!