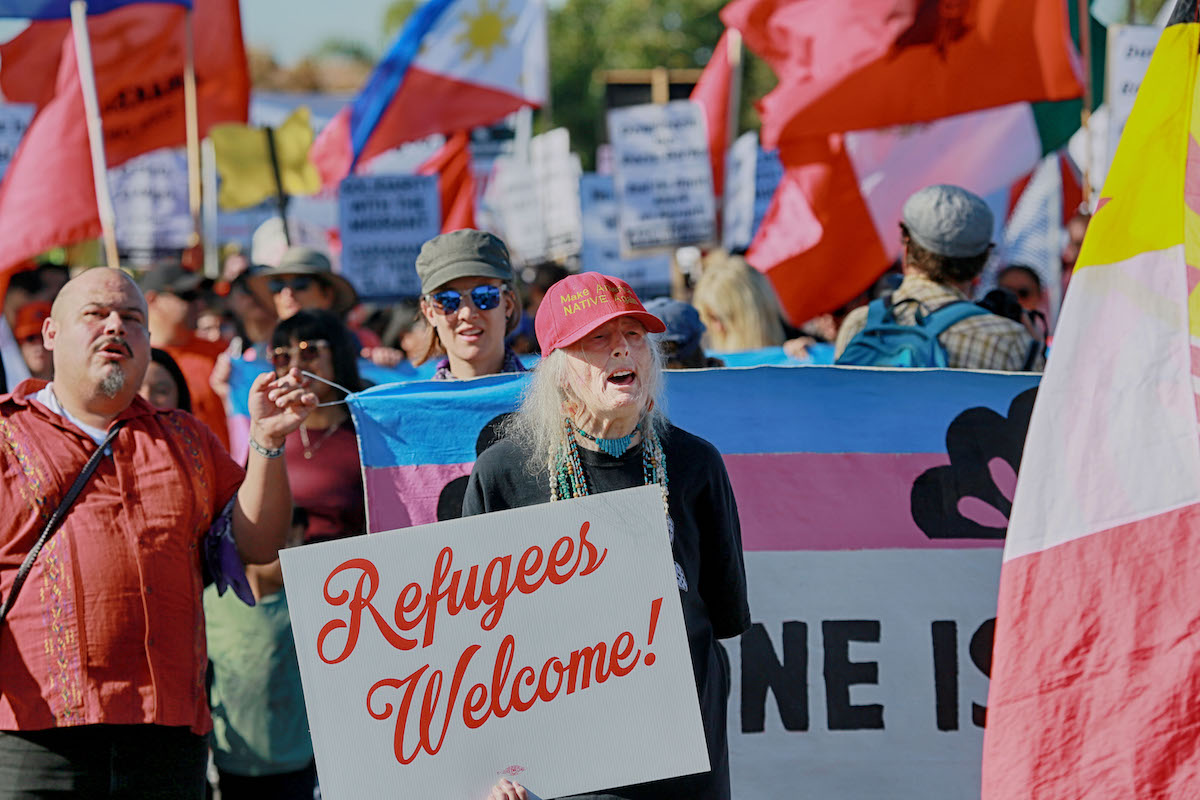 Over the weekend, that caravan Donald Trump has been yelling about began to reach the U.S. The first relatively small group of mostly Honduran asylum seekers attempted to cross the border at the San Ysidro Land Port of Entry in Tijuana, but the port had been closed off. (Other reports say the giant port was not closed off, but suffering from lengthy delays.)

U.S. agents threw tear gas at the asylum seekers as they tried to pass through anyway. You’ve likely seen pictures of the attack, which was made on a group containing a large number of very young children. They’re horrifying.

Over at Sinclair Media, though, their perpetually dead-eyed Chief Political Analyst Boris Epshteyn recorded a “must-air” segment defending the agents’ use of tear gas. His defense was a mash-up of language ripped straight from Trump’s tweets, citing an “attempted invasion” and the need for “rule of law.”

What he doesn’t mention, of course, is the legality of seeking asylum. Now, this is a complicated issue, to be sure, but to call this a clear-cut illegal violation of American laws is, at the very least, incredibly disingenuous. He does not and would never acknowledge that claiming asylum is a legal action, and that one must be on American ground to do so. Yes, you’re supposed to come through via a legal point of entry, but to do otherwise is only a misdemeanor (for a first offense). He also does not mention that these events were part of a planned protest in response to Trump’s ordered delays on the asylum application process.

No matter what your thoughts on the matter, to call this an “invasion” is pure fearmongering.

Of course, there are plenty of other lies and twisted truths being used to instill fear and justify the closing of borders or implementation of major delays, and to make conservative viewers comfortable with the footage of toddlers in diapers being attacked with chemical weapons. Trump has claimed the existence of what he calls “grabbers”–people that grab random children to give themselves “a certain status” in the eyes of, I suppose, border agents and/or the media.

That narrative is useful for him. It offers an explanation for why there are so many children in the caravan that he has repeatedly said is made up almost entirely of criminals. It also allows him to deny the reasons of why women and children might be in that caravan. Among the other myriad issues driving people from their homes, domestic violence is an established valid reason for claiming asylum, and it’s an incredibly serious issue worldwide, including in Central America. But by claiming that the children are pawns–basically a new brand of “crisis actors”–it offers a reason to not care about their reality to people who were looking for one.

As I said, this is a complex issue. But fear is more powerful than facts as a tool to make sure people don’t look at all sides.

If Sinclair Media were just another fake news channel like Fox, this would be bad enough, but you could still ignore it. But Sinclair is different. As we’ve covered before, Sinclair Media isn’t one station, but a conglomerate that owns a gigantic number of local news stations. And they create these “must-run” segments that they distribute to those stations, essentially disguising their propaganda as local news.

Fox News is responsible for changing the landscape of cable news in favor of fear and lies, but Sinclair Media is the next evolution of that evil, doing the same thing, but in secret.