Get Prepped for Sexualization and Fridging: It’s Time for Another Sin City Movie 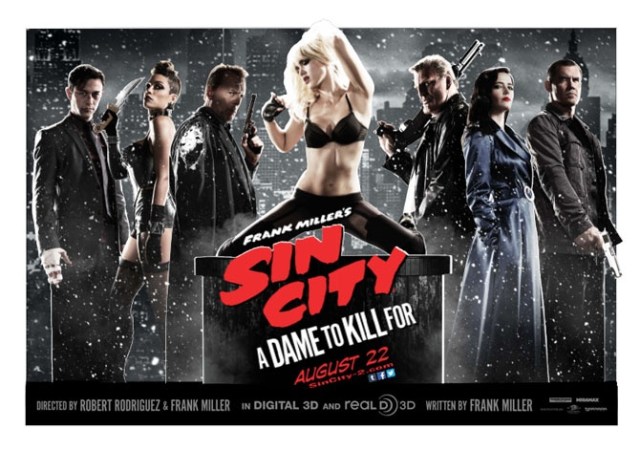 You’ve seen Jessica Alba spread-eagled across the posters on public transport, you’ve heard the controversy around Eva Green’s nipples, and you’ve watched the trailer where Alba spread-eagles on stage and Green brings, well, nipples – after eight long years, the sequel to Sin City is here!

Robert Rodriguez’s 2005 cinematic take on the stark black and white noir-lite world of Frank Miller’s graphic novels propelled the messily-pencilled collection of stock characters and brutal violence onto the big screen painstakingly perfectly. Miller already had quite the reputation among the comic book community for his one-dimensional female characters, and the first Sin City adaptation certainly didn’t disappoint those who’d enjoyed—or ‘enjoyed’—his original printed work (on a personal note, I’d never seen so many be-thonged behinds at the movie theater. And I’ve watched Showgirls 26 times).

As Sin City: A Dame to Kill For seeks to bring more of Miller’s mix of bruising fellas and half-naked women holding machine guns to the screen, it’s the perfect time for us—to use the vernacular of Miller’s milieu—”dizzy dames,” “bitches,” and “whores” to take a look back at his most misogynistic moments in color and ink to prepare ourselves for another go-round. Make yourself comfortable and take off your shirt; you’re over-dressed for where we’re going… 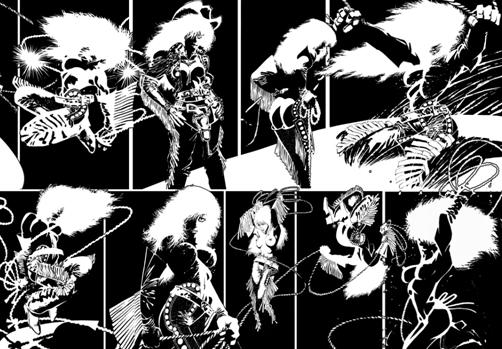 Many avid readers (like moi) of old-school pulp noir like Raymond Chandler joints were surprised to see the reality of the graphic novels that’d been hyped as an homage to the genre. Archetypal bad guys, flawed heroes, and dangerous femme fatales were stripped back in Sin City to forms so simplistic they’re almost unrecognizable as being related to standard noir types. The pencilling backs up the rudimentary characterizations here—meat-head criminals have oversized fists and hulking shoulders to delineate their capacity for violence, and the women are stripped down to component physical parts, too. Child-torture-victim-turned-erotic-dancer Nancy Callahan, for instance, is drawn as a collection of round breasts, pointed nipples, lips, hair, and glazed eyes. And the other female characters don’t fare much better on that front, or in what they’re clothed in by their creator. Unfortunately, the only store serving the female population here appears to be an S&M-themed Fetish Wear Emporium, which must totally suck in winter.

Sin City—novel and film—is filled with brutal violence against all genders, but when the fellas are depowered with castration as though male genitalia is the source of all known power in the universe (more on that later…) and female characters are walking sexual parts constantly at risk of being cut into pieces, something particularly insidious is going on. These streets “run red with blood; women’s blood”, and the bleeding women are drawn to enjoy their treatment. Which is creepy. “I forgot how quick you are,” Gail breathes with arousal after Dwight punches her square in the face. As in “I forgot how quick you are to knock my teeth in, lover”, I guess…

What Just Happened to My Favorite Comic Book Character?

So, we know Miller likes to sexually objectify female characters whether he’s just pencilling or doing the writing.

That’s not a problem specific to Miller in the comic book industry at large, just another thing to grit your teeth through when flicking through a new release. But an added bonus with picking up a Miller piece is the probability that a female character you thought you knew has been retconned to work in the sex industry. You’ve heard the jokes about this repeating through Miller’s work; you know to expect it. But occasionally that goes beyond the self-indulgence of a writer with a penchant for reducing women to sexual function and becomes a means to belittle and mock a much-loved female character.

When The Joker tells retired prostitute and now just-tired brothel owner Selena Kyle “the years have not been kind” in Batman: The Dark Knight Returns, that’s one cruelty. But Bruce Wayne finding her tied up, beaten, bleeding, split-lipped, and crying a few pages later is particularly cruel to the character and the Catwoman canon. 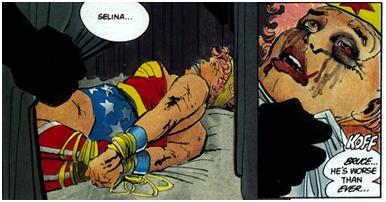 And why does Miller like dressing prostitutes as Wonder Woman so much, you ask? 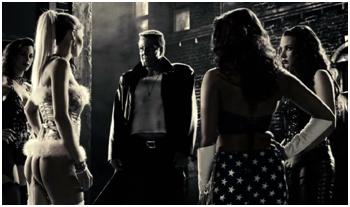 Does Miller have a beef with Wonder Woman as well as Catwoman? Who knows, I answer. It might take a round or two with Diana’s Lasso of Truth to find that out.

Death of Elektra: Open the Fridge; We’ve Got Another Dead Girlfriend Here

At risk of repeating myself as much as Miller does (*rim shot*), for the last slice of sexism from the guy, here’s another example of sexualised violence in his work, this time from his run on the Daredevil comics. It’s not subtle. 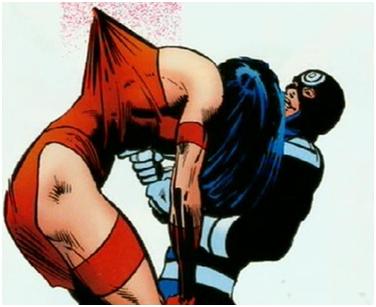 This, in Miller’s words, is “[Daredevil]’s ultimate humiliation.” And here I was thinking it’s a competent assassin suddenly being subdued and killed by some jack-ass who throws playing cards for a living—awkward for me, right? In case you didn’t get the phallic symbolism, and you also hadn’t picked up on the phallocentricism (I told you we’d come back to that…) running through Miller’s work entire, he’s admitted that Elektra’s death is a “rape-murder in a superhero comic”. Which is bad enough, but you take that with the look of love Elektra is drawn giving the dude who’s about to stab her with her own weapon before she dies… 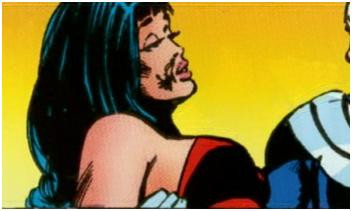 …and you’ve got something particularly problematic and icky. Also, Miller admits his Elektra is inspired by and named for the Electra of Greek myth, who, in turn, had also inspired (and named) Freud’s theory of the Electra Complex. Which is penis envy. Yep. Hmm, suddenly a lot of Miller’s comics make more sense.

I hope that’s got you prepped for Sin City: A Dame to Kill For (*puts shirt back on*), where the streets are as dangerous for female characters as those in Miller’s takes on Gotham and Hell’s Kitchen. I don’t know about you, but I’m heading out dressed as Catwoman…

Phoebe-Jane Boyd’s day job is writing and editing at a media company over in the UK. Her her space time over-analyses comics, film, and Sylvester Stallone movies. She can be found doing that on Twitter @PJ_DWPub.