Why Don’t You Know About the Woman Who Wrote the First Simpsons Episode? Because Garbage Misogyny, Of Course 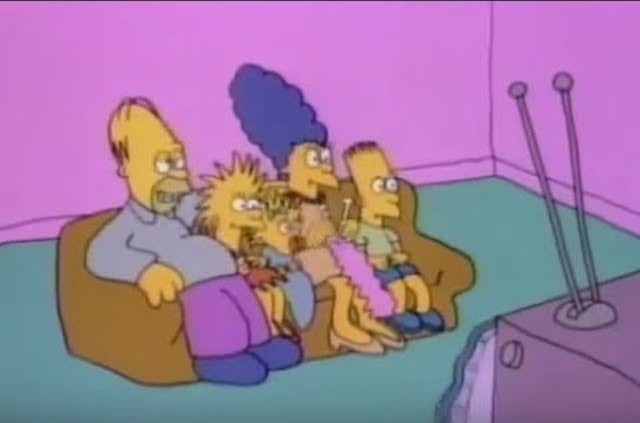 Even the biggest Simpsons fans might not be familiar with Mimi Pond’s name, despite the fact that she wrote the very first full-length episode of the show. Being a huge, lifelong fan, I was surprised I didn’t know of her. And then I read the story of what followed her writing that episode, and I very much wasn’t.

In an interview with Jezebel, discussing her graphic novels, she explained how she got that job:

“My husband and I had been introduced to Matt Groening by Gary Panter. My husband Wayne and Gary had worked together on PeeWee’s Playhouse. We met Matt before the Simpsons happened, when he was doing his syndicated comic strip, Life in Hell. When the series came along, he was asking his cartoonist friends if they wanted to write episodes, and apparently I was the only one who said yes. When I wrote an episode, I wrote it and it just happened to air as the first one because they were behind schedule.”

So why isn’t her name more well known as a Simpsons writer? Because the world is unfair and everything is garbage.

“I was never invited to be on staff, and I never knew why for the longest time,” she says. “No one ever called me or explained to me or apologized or anything. And it wasn’t until years later that I found out that Sam Simon, who was the showrunner, didn’t want any women around because he was going through a divorce. It had remained a boys’ club for a good long time. I feel like I was just as qualified as anyone else who came along and got hired on the show, and it was just because I was a woman that I was, you know, not allowed entry into that club. I always wind up being the turd in the punch bowl because the show is so beloved and everything, and I’m sorry to burst bubbles but [laughs]. It wasn’t a pleasant experience for me.”

So let’s make sure we’re clear. Pond showed initiative and accepted this offer to write a television episode. She was on time with her work when everyone else was behind schedule. She wrote an episode (filtered through a writers’ room, but still, this was her initial product) that hooked audiences and launched one of the most popular shows of all time.

But she was ignored because her boss was having problems with one woman, a totally different woman, and let that bleed into his work life enough to exclude all women from the writing staff. Through absolutely no fault of her own, and only because of the personal issues one man was going through, she was denied the opportunity to pursue an entire career.

What really makes this story feel so familiar is how quietly it happened. I’d never heard this story told. No one told Pond what happened. For women who experience workplace discrimination, rarely is there an open conversation about why a woman is being discriminated against.

Whether it’s an unconscious decision to pass a woman over for a job or a promotion, or, say, a powerful man’s firm policy not to ever be alone with women and who therefore is incapable of developing the same kinds of professional relationships with women as he has with men–sexism and discrimination happen quietly, which is one reason why so many people (especially men) have a hard time believing it exists. There’s a persistent mentality that truly believes if women are really treated this unfairly, they would have heard about it.

Mimi Pond’s story of being denied access to a job she earned is not unusual. This type of discrimination happens all the time. A man can be going through a divorce, or think a woman can only be hired to deliberately feminize the work, or maybe he doesn’t even know why, he just wants to go with the other guy. These choices so often go unexamined, often even unspoken. But they happen all. The. Time.

When you’re done being mad at humanity, I definitely recommend giving the full interview a read, and picking up Mimi Pond’s books while you’re at it.