The Simpson’s Korean Animators’ Working Conditions Are Just Fine, Thanks 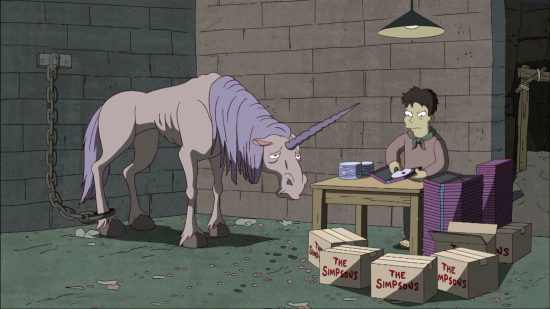 The animators of The Simpsons would like everyone to know that despite the Banksy directed “couch gag” containing a depiction of their workplace being full of rats, lacking in light, and enslaving children and unicorns and murdering kittens; their working conditions are actually pretty normal.

Nelson Shin, who has worked on The Simpsons since it’s first airing in 1989, told Time that

The satire… gave the impression that Asian artists slave away in subpar sweatshops when, in fact, they animate much of The Simpsons every week in high-tech workshops in downtown Seoul. “Most of the content was about degrading people from Korea, China, Mexico and Vietnam,” Shin fumed. “If Banksy wants to criticize these things … I suggest that he learn more about it first.”

Banksy has declined to comment on the intended meaning of the sequence (understandable, since ideally a work of art should speak for itself), though Time argues that the conditions were likely aimed to represent workers in South Korea’s northern neighbor.

Outsourcing is overwhelmingly the norm in American television animation, in case you’re unfamiliar with the subject.  Pretty much every regularly produced American animated show is written, storyboarded, designed and recorded in America, and the raw materials (storyboards, character designs, color choices, and recorded dialogue) are sent to an animation studio in Japan or Korea.

Akom, the Korean production company that animates The Simpsons, has also animated Animaniacs, Conan The Adventurer, Dilbert, Gargoyles, Arthur, The Oblongs, Pinky and the Brain, The Tick, Tiny Toon Adventures, and episodes of Batman: The Animated Series, The Muppet Babies, The Transformers, and X-Men.  And that’s not the whole list.

Why don’t we keep the work in the USA?  After all, this is the country of Walt Disney!  Well, this is at least partially because the American mainstream has never learned to disassociate “animated” from “childish.” This means that the medium of animation is confined to a few genres, and the industry isn’t taken very seriously.  Go ahead.  Name three American animation companies.  Disney, Pixar, and Dreamworks, right?  Now look at the movies they make.

Now think about the wide levels of content maturity in anime, and you can see right away why becoming an animator or funding an animated movie might be easier in a culture that takes the medium seriously.

Of course, another reason why we like to animate our shows in Korea is because despite being high for the region, Korean animators’ salaries are a third that of Americans’.  At least one kernel of truth in Banksy’s satire.