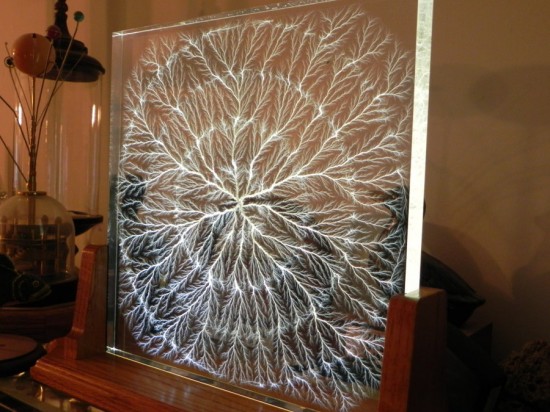 There are plenty of ways to create art. You can draw, you can paint, you can write, or you can rent time at a particle accelerator and fire supercharged electrons into acrylic slabs and then hit the slabs with a hammer so the electrons scald fractal patterns into the slab as they escape. I lean towards writing, but man, that particle accelerator thing sounds cool too. That particular medium is Todd Johnson‘s chosen specialty and he calls the results by the awesome name of Shockfossils.

To make his Shockfossils, Johnson rents time at his local particle accelerator, which is apparently a thing you can do. Next, he puts the slabs through the accelerator where they become charged with some several million volts of electricity, the electrons careening into the acrylic slabs where they become trapped. Afterwards, the slabs can be pierced by any manner of pointy device, at which point the electrons beat feet, leaving scorched paths behind them in beautiful, complex fractal patterns.

It isn’t just slabs though, Johnson has found a number of ways to mix it up. The process works just as well on cubes, or on cylinders, so long as they’re being rotated when they’re charged. And when it comes to slabs, Johnson can coax the electrons into specific shapes through the use of lead stencils. Finally, there’s some post-production work to be done by mounting the Shockfossils and edge-lighting them with LEDs, giving each piece a color, or in some cases, more than one.

Whatever gripes you may have with “art” that seems to be created in the abscense of some sort of finely honed “skill” or “talent,” you can’t deny that firing electrons at things is a pretty sweet way to make a centerpiece for your living room. Imagine one of these babies as a coffee table. You can check out some of Johnson’s more sophisticated Shockfossils over at his deviantART page. It is totally worth your time.